A student of the sea 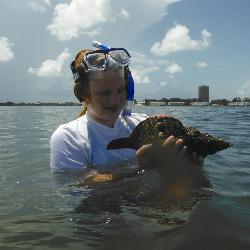 Sophomore Charlotte Eckmann’s internship at the Mote Marine Laboratory immersed her in marine field research that complements her laboratory work at South Carolina.

Charlotte Eckmann is just midway through her sophomore year, but the marine science major has found that career-building experiences come quickly at the University of South Carolina.

“I have had so many opportunities and done so many things that I never thought I’d do,” she says. “This is definitely preparing me for where I want to go.”

A native of Lexington, Ky., Eckmann spent many a family vacation in Sarasota, Fla., the home of Mote Marine Laboratory and Aquarium. Her trips there helped nurture a love of the ocean that grew into an ambition to study marine science in college.

She returned to Sarasota this past summer for a 10-week internship at Mote, where she worked on a conservation study involving the hard clam (Mercenaria mercenaria) and the bay scallop (Argopectan irradians). But while Eckmann enjoyed observing and working with sea life that looks great in snapshots, her professional goal involves critters that you can’t even see with the naked eye.

“I’m interested in microbes, and right now I’m working in a lab studying marine bacteria,” she says. “I’m probably more interested in those things, not so much the big, charismatic macro-fauna.”

Eckmann started research in the spring of her freshman year, working in the laboratory of Sean Norman, a professor in the Arnold School of Public Health. Given her own project this past fall, she earned a Magellan Scholar grant that will help support a study of a serious problem: the development of antibiotic resistance in bacteria.

Treated wastewater is typically discharged into natural streams and rivers, and her plan is to study its effects on bacteria downstream from where the waste is released.

“We’re going to try to get a paper out of that, so that would be really, really exciting,” she says.

The process of applying for the Magellan Scholar grant, which provides up to $3,000 in financial support for a successful application, was invaluable.

“I want to ultimately earn a Ph.D.,” she says. “I’ll have to write grants to support my research, so it’s extremely good practice for that.”

“Working in a lab, my experience over the summer, being involved with SEAS, it’s preparing me for what I want to do,” she says. “It’s definitely a great learning experience.”