The Southern Exposure New Music Series is devoted to exploring the rich variety of contemporary classical and world music written in the past 30 years and masterworks of the 20th century.

The Southern Exposure New Music Series’ 19th season is about making connections: between humans and the natural world, the present and the past, one of today’s foremost ensembles and UofSC students and faculty, and a father and son.

All Southern Exposure concerts are FREE

The safety of our audience and performers is paramount and will be ensured through outdoor performances, social distancing, mandatory face coverings and limited audience sizes.

UofSC music faculty and students perform an outdoor program of music at Thomas Cooper Library Fountain that both celebrates nature and laments the role humans have played in its decline.  The School of Music’s flute and percussion studios, led by Jennifer Parker-Harley and Scott Herring, are especially featured.  Pieces include Chen Yi’s joyous Happy Rain on a Spring Night, for a quintet of strings, winds, and piano; Toru Takemitsu’s evocative percussion trio, Rain Tree; John Luther Adams’ animated flute octet, Strange Birds Passing; and Southern Exposure Assistant Director David Garner’s lovely, layered Eternal Song, a mixed wind / strings/ percussion / voice septet inspired by Richard Powers’ powerful novel The Overstory.  The program’s namesake and emotional center is George Crumb’s An Idyll for the Misbegotten, for flute and percussion. This work, meant to be heard “from afar, over a lake,” is inspired in part by the haunting theme of Debussy’s solo flute piece Syrinx, as flute and mixed percussion instruments evoke “the voice of nature.”

This outdoor, socially distanced concert for a limited audience will be held at the Thomas Cooper Library Fountain, accessed from Greene Street on the UofSC campus. For those who cannot attend in person, the performance will be livestreamed.

Alarm Will Sound returns to Southern Exposure fifteen years after the group’s first appearance, this time in an online concert. The adventurous group has explored new ways to make music together virtually during the pandemic, including recording a series of commissioned works called “Video Chat Variations” that take advantage of the medium’s quirks and idiosyncrasies.

This livestream, hosted by Southern Exposure’s artistic director and the group’s bassoonist, Michael Harley, includes new pieces by Meredith Monk, Tyshawn Sorey (conducting the group in an extended free improvisation), and Rohan Chander, and features the world premiere of “Respiration,” a major new piece by UofSC composer John Fitz Rogers. “Respiration” was written for AWS; on this special recording the group is joined by New Sounds +, a quintet comprised of UofSC string students.

Live Q&A:
The concert will conclude with a live discussion and Q&A with Rogers; Alarm Will Sound’s conductor, Alan Pierson; Executive Director Gavin Chuck; and flutist Erin Lesser. The audience will be encouraged to submit questions via chat in real-time during the broadcast.

This is an outdoor, socially distanced concert for a limited audience. The audience will be required to wear face coverings. For those who don't attend in person, the performance will be live-streamed. More info about the program here.

A part of Bridging Our Distances, an initiative imagined by the faculty and student leaders of the School of Music.

6:00 p.m., UofSC campus, Historic Horseshoe
5:30 audience check-in outside McKissick Museum
SOLD OUT
Season patrons receive registration priority.
Free / Limited access
A part of Bridging Our Distances, an initiative imagined by the faculty and student leaders of the School of Music.

Ten Thousand Birds is a celebration of the music of the natural world and our relationship to it by one of America’s foremost living composers, Pulitzer-winner John Luther Adams. The piece, meant to be performed outdoors, features the composer’s stylized renderings of birdsong (20 bird species are represented) and other sounds from nature, played by a chamber orchestra of strings, winds, brass, percussion and keyboards. This special event, staged on the heart of campus, UofSC’s historic Horseshoe, was performed by UofSC students, socially distanced, with discreet areas for audience members and performers. Staging and direction by Michael Harley, original concept and design by Alan Pierson. For more information about this event, including pictures, videos, and a special Southern Exposure interview with the composer, please see our Ten Thousand Birds website.

Get the details here.

Founded in 2001 by UofSC associate professor of composition and composer John Fitz Rogers, the nonprofit series has grown steadily and attracts standing-room-only crowds from throughout South Carolina and neighboring states.

The series has achieved a national reputation for the quality and adventurous spirit of its four yearly concerts, unparalleled in the southeast for their mix of artistic quality, audience education and cutting-edge programming.

Southern Exposure was awarded a 2007 Chamber Music America / ASCAP Award for Adventurous Programming in its 2005-2006 season.

These free concerts are often standing room only and early arrival is suggested for seating. For a donation of $100 or more, you can reserve one seat for the entire Southern Exposure season. Donate online.

Groups and artists of international repute who have made their Columbia and South Carolina premiere performances in a Southern Exposure concert include:

­­The COVID-Impact Commissioning Project is funded by University of South Carolina’s “Racial Justice and Equity Fund,” the Southern Exposure New Music Series at the UofSC School of Music seeks two BIPOC (Black, Indigenous, or Person of Color) composers based in the U.S. of any age to be commissioned to write new works for a superb chamber ensemble of UofSC faculty new-music performers. 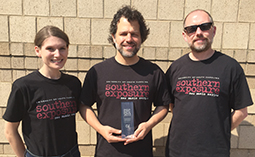 See the past seasons

For a donation of $100 or more, patrons may reserve one seat for the entire Southern Exposure season.

eighth blackbird kicks off the 2016 Indie Grits Festival with their HAND EYE project.