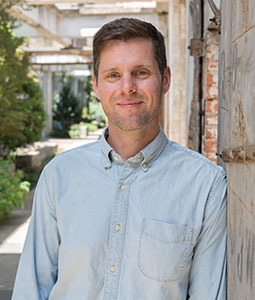 David Kirkland Garner writes music, plays banjo, studies fiddle, listens to jazz, hears everything, but suspects he knows nothing. Encompassing chamber, large ensemble, electroacoustic, and vocal works, his music reconfigures past sounds—from Bach to minimalism to bluegrass—into new sonic shapes and directions. He seeks to make time and history audible, particularly through an exploration of archival recordings documenting the musical traditions of the U.S. South.

His most recent piece Red hot sun turning over: on Southern monuments, myths, and histories is an 80-minute, multimedia piece for mezzo-soprano, wind ensemble, wind quintet, archival sound and film in which Garner uses music, sounds and images from the Civil War era and the early 20th century to erect monuments and tear them down, write and re-write histories, expose the complex web of southern myths, and confront the nostalgia and pain surrounding Confederate monuments in the South. His approach is informed by research into Civil war history, the history of the South, African American history and primarily through an exploration of the history of racism and constructions of whiteness, which are inextricably linked.

Garner's first album Dark Holler was released in 2017 by New Focus Recordings. Reviewer Kevin Baldwin writes that "Garner’s voice as a composer is unmistakable; with a true passion and inspiration of the music of the South, Garner creates an engaging and lively listening experience."

He has worked with world-renowned ensembles including the Kronos Quartet, which commissioned a work based on the music of the Scottish diaspora. Awards include a Charles Ives Scholarship from the American Academy of Arts & Letters, an ASCAP Young Composer Award and first prizes in the OSSIA, Red Note and NACUSA competitions. His music has been performed by the Pittsburgh New Music Ensemble, Contemporaneous, Imani Winds, Invoke string quartet, Ciompi Quartet, Vega Quartet, San Deigo Symphony, Locrian Chamber Ensemble, the Wet Ink Ensemble, the Boston New Music Initiative, Mallarmé Chamber Players and the yMusic Ensemble.

Garner is an Assistant Professor of Composition and Theory at the University of South Carolina, having previously taught at Duke, Kennesaw State, North Carolina State and Elon Universities. He holds degrees from Duke University (PhD, 2014), University of Michigan (MM, 2007) and Rice University (BM 2005).