The phrasing is in two-measure groups, so place your breaths on the barlines between them. Do not let a random breath fall in the middle of the phrase. That makes it sound like you ran out of air at the wrong time. With the way these phrase endings are written there is a tendency for many players to make it sound like beginning of the next phrase comes in slightly early. This is caused by the player not making sure that the final note and rest in the previous measure are held full value. You will keep track of the beat by following this useful guideline: unless you are instructed to do differently, a note followed by a rest should release on the rest.

The quarter note on count three of measure 2 stops on beat four. The half note in measure 16 also releases on beat four. Many players will have a tendency to rush the after-beats in measure 15. Practice with a metronome until you get a sure feel for the beat on the eighth rests, and place the eighth notes securely after them.

As with all of the other audition pieces, there are many details with dynamics and articulations. The advantage goes to the players that observe them all.

This solo requires a good deal of technical facility. The running sixteenth notes are easier to play cleanly if you think of them as connected and keep the airflow moving through them. Playing them staccato makes them sound choppy and requires more effort to play. However, the staccato eighth notes in measures 11 and 12 add character and bounce to the style, so do not ignore them. A very common error is for the beginning of the phrase in measure 11 to start slightly early. The cause is the player not holding the previous dotted-half note for its full value. The best solution for this problem is to adopt this very useful guideline: unless you are instructed to do differently, a note followed by a rest should release on the rest. This help the player keep a feel for the steady beat.

As with all of the other audition pieces there are many details with dynamics and articulations. The advantage goes to the players that observe them all. Record your practicing and make sure you can hear the markings in the sound. Measure 23 with its pick-up beat has details that need to be heard. Practice it with a metronome slowly and get all the markings. Notice which notes in the bar are supposed to line up with a click and make sure they land there. The judge will be listening for the slur on the first two notes of beat two, and for the long slur on beats three and four. If you are having trouble playing the first note of measure 24 squarely on time you can correct this (in your practicing only) by replacing the eighth rest downbeat with an eighth note B-flat, and repeating it until the rhythm feels secure. Then put the rest back in and see if the accented rhythm is accurate. You can check the accuracy of measure 8 the same way.

Grazioso (with grace and elegance) and the tuba may sound like a contradiction. The composer knows it is not, but it is up to us, the players, to actually make it work. The approach must easy and effortless.

Measures 1-12 should be smooth and connected. The tempo must be steady; many players will fall into the trap and start measures 5, 9 and 19 slightly early. The reason this happens is not making sure that the longer notes and rests are held full value in measures 4, 8 and 18. The guideline, unless you are instructed to do differently, is that a note followed by a rest should release on the rest. If you are counting in two beats per bar (which feels smoother than counting in six) then in measures 4, 8 and 18 simply release the dotted quarter on beat two, and place the first note of the following measure on the next strong beat. As you practice with your metronome listen and make certain these events line up right on the click.

Pay careful attention to the slur markings. In measures 1 and 2 only the first two notes are tongued and the rest are slurred. Follow all of the other articulation markings carefully as well. In measure 13 the first three notes may be smoother to slur if you finger the sixteenth note D “1-2” instead of “0”.

There is a curious rhythmic oddity that can happen going from measure 20 into measure 21. If the end of measure 20 is not held full value and the next downbeat eighth note is played even slightly early, the listener will sense it as a pick-up note and the accented quarter note will sound like the downbeat. After that, the rhythmic accuracy feels off for the next two measures. Be absolutely sure to place the downbeat eighth note in measure 21 precisely on the strong beat. Even though it is not printed, I like to accent this note slightly to help remove any doubt for the listener. Just make sure the following quarter note gets a touch more emphasis.

Measure 32 can be tricky technically. Slow down the metronome and practice it until you can play it exactly as marked. The player should keep the airflow moving full and steady through the entire figure. If your habit is to use a little wind hitch to get through the first two sixteenth notes it will not sound as smooth. Play it slow, keep the airflow, and then bring the metronome up gradually to your performance tempo. 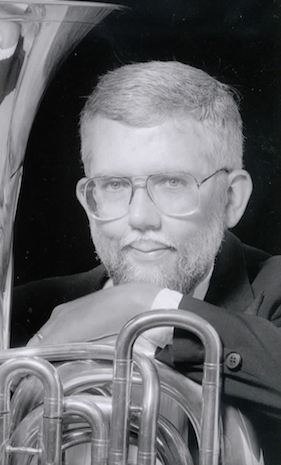 Ronald Davis is professor of tuba/euphonium at USC