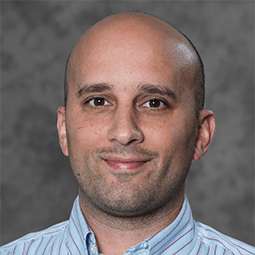 Research Area 1: Interactions between implanted polymeric materials and soft tissues
My early work was focused on understanding soft tissue-material interactions for the purpose of optimizing surgical sealant performance. The publications that emerged from this line of inquiry impacted the field in two distinct ways. First, we provided the initial demonstration that adhesion is a tissue-specific phenomenon that can be exploited in advanced material design. Second, these and related publications established novel design strategies to enhance adhesion strength without compromising material biocompatibility – the power in these strategies is that they can be generalized across material systems and surgical sealant applications.

Research Area 2: Characterization, assessment, and modeling of endovascular technologies
Endovascular technologies such as drug-eluting stents, erodible scaffolds, and drug-coated balloons have steadily evolved over the past 40 years. Multidisciplinary research approaches are needed to design, optimize, and evaluate emergent devices, typically requiring consideration of hemodynamics, drug pharmacokinetics, material mechanics, and device degradation/erosion kinetics. To accommodate this inherent complexity in the face of rapid device development, regulatory agencies have begun to expect and nearly require predictive computational models which clearly explain the mechanism-of-action and potential risk of new technologies. To meet this field demand, our work has been focused on the development of finite element-based computational models and design/deployment strategies to facilitate the continued advancement of endovascular technologies and their safe introduction into clinical practice.

Research Area 3: Experimental and theoretical biomechanical studies on native and engineered blood vessels
The identification of constitutive mechanical models of vascular tissue is essential for quantifying the local environment of mechanosensitive vascular cells in normal and disease states, understanding mechanically-mediated vascular tissue remodeling, and providing a basis for the engineering of vascular tissue substitutes. Publications in these areas have been impactful in terms of providing data and models for previously understudied yet critical regions of the circulatory system, applying continuum-mechanical principles to explain intra-vessel variations in geometry, properties, and composition, and introducing tissue-engineered constructs which exhibit enhanced matrix elaboration and thus potential as vascular substitutes.