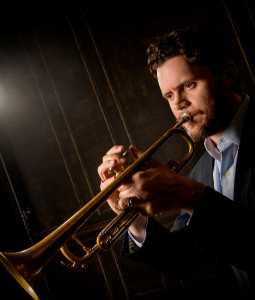 Trumpeter, Composer, Educator, and technologist Dr. Matthew White is a curious musician, often blurring the lines between musical styles and conventions. Before entering academia, he was a freelance and session musician in Nashville and Miami. He holds degrees from the University of North Florida and The University of Miami and has appeared on numerous albums, radio broadcasts, and television shows, performing and composing music for artists as varied as: Rihanna, Becca Stevens, The Tommy Dorsey Orchestra, Victor Wooten, Steve Bailey, Oscar DeLeon, Duranice Pace, Charlie Peacock, the Czech Republic Arts Ministry, and Jeff Coffin, in addition to various other artists, ensembles, symphonies, and big bands.

As a composer, Matt’s music has been described as “rhythmically brash and invigorating” by the Washington Post, with “a knack for sweeping, cinematic statements” by Downbeat Magazine. While rooted in the jazz tradition, his music often draws on non-musical inspiration, such as local culture, literature, scientific phenomenon, or personal experiences. This is perhaps best illustrated by the titles of his compositions, which include The Yankee Poured Out the Bacon Grease, The Hadron Collider, and The Copenhagen Garment Bag Incident. Matt’s two releases as leader of The Super Villain Jazz Band both received 4-star reviews in Downbeat Magazine and were included in the Best of the Year lists.

A 2019 Guggenheim Fellow in Music Composition, Matt’s recent works have been heavily influenced by southern folk music traditions, particularly those of the Gullah Geechee people of the Coastal Carolinas. In addition to contemporizing folk songs and oral histories, Matt does extensive work recording and archiving the songs and stories of Gullah elders in the region. He has engineered recordings for the “Free and Equal Project” in partnership with the NEA, and artists Ron Daise and Dave Douglas. He was a keynote speaker at the 2017 National Association of Leadership Educators Conference, and a finals judge at the 2019 International Trumpet Guild Jazz Competition.  He is a member of the Charleston Jazz Orchestra.

From 2012-2021, Matt was a professor of Music at Coastal Carolina University, where he developed two new degree programs in Commercial Music and Music Technology. The 2016 Coastal Jazz Combo, under his direction, won a Downbeat Student Music Award and performed at the Montreux, Vienne, and Umbria Jazz Festivals – all firsts for the University. He was voted most outstanding faculty member in his college twice (2014, 2019), and produced three different professional recordings for the University Press as manager of the campus recording studio.