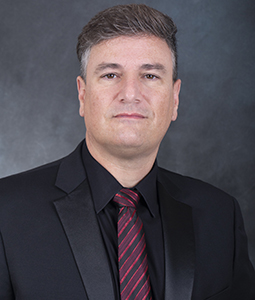 Jay Jacobs is Associate Director of Bands and Associate Professor of Music at the University of South Carolina, where he is the director of The Carolina Band, conducts the Symphonic Winds and teaches courses within the School of Music. He holds the Bachelor of Music in Music Education degree from West Virginia University, where he studied trumpet with John Winkler and conducting with Don Wilcox.  Dr. Jacobs earned the Masters of Music in Conducting and Doctor of Philosophy in Music Education degrees from the University of Florida, studying in the conducting studio of David Waybright.

Dr. Jacobs’ career in public education included teaching as a middle school and high school band director in Kirkland, Illinois, and prior to his appointment at UofSC, he served as Associate Professor of Music and Director of Bands at McNeese State University in Lake Charles, Louisiana. Under his direction, the band program doubled in size, with the ensembles gaining recognition on the state, national and international level.

Dr. Jacobs has served as a clinician and adjudicator in West Virginia, Illinois, Georgia, Florida, South Carolina, Iowa, Louisiana and Texas, and as a presenter at professional conferences.  He has performed in and conducted ensembles internationally and has served as a guest conductor with the Lake Charles Symphony Orchestra.  He is a recipient of the McNeese President’s Award for Outstanding Mentorship and was selected as the 2015 Faculty Member of the Year by the McNeese Student Government Association. Dr. Jacobs is an honorary member the Alpha Eta and Iota Upsilon chapters of Kappa Kappa Psi and the Beta Xi chapter of Tau Beta Sigma, the national band service fraternity and sorority. He is an honorary member of the Rho Zeta chapter of Phi Mu Alpha, as well as a member of the National Band Association, National Association for Music Education, and the national bandmasters fraternity, Phi Beta Mu.  He has also served as the Louisiana State Chair for CBDNA and the University/Research Division Chair for the Louisiana Music Educators Association.