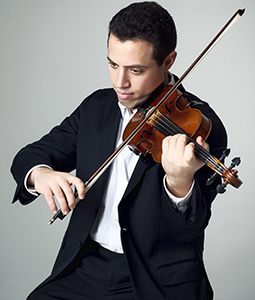 Together with his wife, mezzo-soprano Rachel Calloway, Dr. Streisfeld formed Duo Cortona, a contemporary music ensemble dedicated to the creation of new works for the unique instrumentation of mezzo-soprano and violin. Recent and upcoming performances include the Resonant Bodies Festival, SONiC Festival, The Stone (NY), Contemporary Undercurrents of Song Project (Princeton, NJ), New Music on the Point (VT), and The Cortona Sessions for New Music (Italy). He is also a member of Shir Ami, an ensemble dedicated to the performance and preservation of Jewish art music. Dr. Streisfeld frequently collaborates with some of today’s leading ensembles, including Ensemble Signal, Worldless Music Orchestra, and Weekend of Chamber Music.

Hailed as “imaginative” by the Los Angeles Times, Dr. Streisfeld’s arrangements of madrigals and motets for string quartet by Machaut and Gesualdo have been performed to acclaim both at home and abroad. A recipient of the Morton Gould Young Composer Award, Dr. Streisfeld most recently premiered his Machaut arrangements for voice and violin at The Stone (New York).

A passionate and committed music educator, Dr. Streisfeld holds the position of Assistant Professor of Violin and Violin Pedagogy at the University of South Carolina School of Music. He also serves as head of strings at the Carolina Summer Music Conservatory and is on the faculty of the Cortona Sessions for New Music (Italy). He was previously on the faculty of New York's Special Music School, Face the Music, and New Music on the Point.