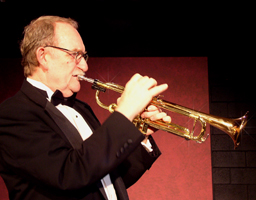 Gordon (Dick) Goodwin came to the University of South Carolina in 1973 to start a doctoral program in composition, to head the theory-composition area, and to arrange for the Carolina Band. He also directed the University Symphony for a number of seasons. He was a recipient of the prestigious USC Educational Foundation Award and is the 2001 Elizabeth O'Neill Verner Individual Artist winner (the highest honor awarded in the arts by the State of South Carolina.) He was named Distinguished Professor Emeritus in 1999.

Goodwin received his doctorate from the University of Texas where he taught for nine years, directing the jazz program, which he initiated, and teaching theory and composition. Prior to that, he served four years as a band director in the U.S. Coast Guard. His teachers included Hunter Johnson, Kent Kennan, Alexander von Kreisler and J. Clifton Williams.

Goodwin’s works in virtually every idiom from jingle to opera, jazz band to orchestra, have been performed across the U.S. and abroad. He has had a long association with the South Carolina Philharmonic composing, arranging, occasionally conducting and playing double bass and trumpet and continues to lead the Dick Goodwin Big Band and the Dick Goodwin Quintet, which has made a dozen foreign concert tours. Goodwin also produces film scores, commercials and albums at GEM Recordings.

Goodwin’s daughter, Gradi Evans (BM. MM at USC), is a fine arts coordinator for the Geneva School in Boerne, Texas. His son Richard is a member of the USC School of Medicine faculty. Wife Winifred has served as staff pianist for the School of Music and is the principle keyboardist with the South Carolina Philharmonic.