The Kennedy Pharmacy Innovation Center at the University of South Carolina College of Pharmacy is a specialized learning center combining the study and practice of pharmacy with the exciting opportunities of entrepreneurship and innovation. 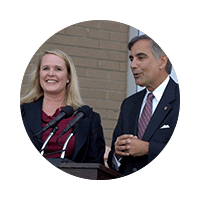 The Kennedy Pharmacy Innovation Center was established at the University of South Carolina with a generous gift from alumni Bill (1966, B.S. pharmacy) and Lou Kennedy (1984, B.A. journalism.)

In September 2010, Bill and Lou Kennedy announced a multimillion-dollar gift to help create a center that would serve as a home for collaborative research and education. It would bring together the nation’s top minds in entrepreneurship, health sciences, communications and other disciplines with leading pharmacy practice faculty. Since that time, the Kennedy Pharmacy Innovation Center has been a launching pad for initiatives that have pushed the College of Pharmacy to new heights.

We hope to make a major impact on the pharmacy profession and how it is practiced today. We feel that pharmacy, governed by new health care laws, is a changing industry. It is paramount to be at the front of this change ... More innovation and a broader curriculum will set the university’s pharmacy school apart.

The Kennedy Pharmacy Innovation Center equips students with entrepreneurial skills is necessary to tackle the ever-changing field of health care. KPIC offers unique training opportunities to students seeking to expand both their clinical and business skills. KPIC also has sponsored pilot studies where pharmacists were embedded into family medicine practices and demonstrated that pharmacists improved patient care, satisfaction and financial sustainability of those practices. 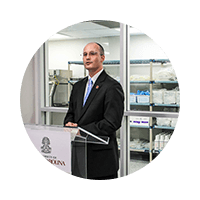 In Spring 2014, the Aseptic Compounding Experience (ACE) Laboratory opened in the basement of the Coker Life Sciences building. The cutting-edge facility was planned and constructed partly as a response to a deadly fungal meningitis outbreak caused by the New England Compounding Center in 2012. Because of improper compounding procedures, more than 700 people nationwide were sickened from tainted steroid injections, with at least 60 deaths linked to fungal contamination. Our ACE Lab provides pharmacy students, licensed pharmacists and pharmacy technicians the hands-on training needed to help prevent such a disaster from occurring again.

Since its inception, the Kennedy Pharmacy Innovation Center has helped train more than 500 pharmacy professionals, has enrolled more than 50 students the Business and Entrepreneurship track, and has trained 22 residents.