Throughout the colonial period in South Carolina, shipbuilding was centered around three trade centers: Charleston, Georgetown, and Beaufort. From the beginning of the 18th century up until 1865, Charleston supported some 14 shipyards. Probably the largest shipyard of the colonial period in South Carolina, was the yard started on the south side of Hobcaw Creek in 1753 by two Scottish shipwrights, John Rose and James Stewart. In 1778, the Prichard family purchased the shipyard and maintained a shipbuilding and repair facility until its closure in 1831. The site was placed on the National Register of Historic Places in 1974. In 1993, with assistance and partial funding from the private landowners, the MRD surveyed the 7.5 acre site and excavated the remains of 7 meter by 7 meter brick structure. More than 28,000 artifacts were recovered associated with the 78-year usage of the shipyard site. In addition to the terrestrial survey and excavation, the MRD also investigated the foreshore of the shipyard along Hobcaw Creek in search of intertidal and underwater features associated with the shipyard. 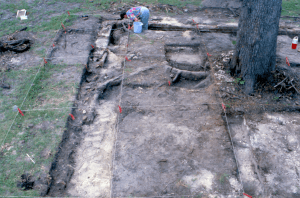