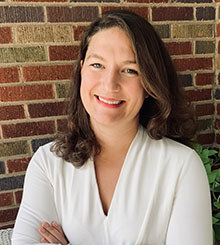 Parrish Elizabeth Wright received her Ph.D. in Greek and Roman History and her M.A. in Classical Art and Archaeology from the University of Michigan. She holds a B.A. in Classics from McGill University. Before coming to South Carolina, she was the Samuel H. Kress Foundation Rome Prize Fellow at the American Academy in Rome. She is generally interested in studying the history and archaeology of pre-Roman and Roman Italy with the use of both textual and material evidence. Her research centers on foundation stories in southern and central Italy, specifically how both Greek settlements and indigenous groups use myth to articulate identity and build connections throughout the Mediterranean. In her book project, she demonstrates the value of these stories to building communities and argues for a rich historiographic tradition in southern Italy largely independent of Rome and Athens. Parrish is also actively engaged in archaeological research in Italy as a trench supervisor at the Gabii Project, located outside of Rome, where she has worked since 2014. She also excavates at the Venus Pompeiana Project exploring the temple complex of Venus in Pompeii.