Impressive autism research from the University of South Carolina psychology department may lead to earlier diagnoses in young children.

Researchers Jessica Bradshaw and Stefania Conte in UofSC’s Department of Psychology are each working to better understand autism spectrum disorder (ASD) in infants up to 12 months, examining nonverbal communication cues and facial recognition to look for telltale signs of the disorder.

“Most autism diagnoses come around age two, but that’s missing out on two years of peak brain plasticity,” Bradshaw says. Because the first two years of brain development are some of the most crucial in a child’s life, early diagnosis and intervention can help reduce the long-term impacts of ASD symptoms, Bradshaw says.

ASD is a developmental disorder that affects communication and behavior in over 75 million people in the U.S., according to the National Institute on Mental Health. ASD symptoms can include difficulty with communication and interaction with other people, restricted interests and repetitive behaviors. UofSC has prioritized research on the subject at its Carolina Autism and Neurodevelopment Research Center (CAN), run by university faculty.

When Jessica Bradshaw joined UofSC’s psychology department in 2018, she created the Early Social Development and Intervention (ESDI) Lab to house her research on autism in infants, earning her the 2021 Breakthrough Star Award. For Bradshaw, earlier is better for a diagnosis.

Her current work focuses on early identification and intervention of ASD in the first 12 months, particularly from birth to 4 months. She and her research assistants observe children interacting with parents in the lab while recording the infants’ eye movement and heart rates. These physiological measures of attention can identify the tell-tale signs of ASD — lack of eye contact, laughing or babbling, and limited gestures like waving or clapping.

In October, Bradshaw and her colleagues published first-of-its-kind research showing that infants who were later diagnosed with ASD showed less attention to objects when they were two to three months old. The research, published in the journal Developmental Medicine & Child Neurology also showed that this lack of attention predicted social communication skills at year two.

The ESDI Lab does more than collect data on the children, though — it serves their parents as well. Parents of children with autism often face high levels of stress and increased mental health challenges. “It’s a very unique experience with unique challenges to have a child with autism,” Bradshaw says.

To help, the ESDI Lab offers a monthly respite program to give participating parents a break. The children are cared for while the parents can have a morning to themselves. Bradshaw is also coordinating a treatment program to teach parents how to reduce stress in those hard moments. Along with the CAN center, they are tracking the effectiveness of the stress-relief techniques.

But Bradshaw has already seen some positive results from her work in real time. Megan and her son Charlie are participants in the ESDI study. Soon after they started the study, Megan noticed Charlie was not babbling like most babies do. Bradshaw was able to identify some communication challenges in Charlie and recommended early intervention for speech and motor delays.

After two years, Megan says Charlie’s communication continues to show improvement, and he is playing more like other children his age.

“Without this research, we wouldn’t have known he had these delays or that these services were needed,” Megan says. “Without participating in the study, we definitely would not be where we are today.”

While Bradshaw observes infant behavior in the lab, Conte’s work studies what is happening in the infants’ brains.

Conte, who grew up in Italy, was the first in her family to go to college.

Her Ph.D. work focused on facial processing in typically-developing infants and children. She observed the ways infants can discriminate different face types, ethnicities and even species by age one. She now uses the same approach, and her knowledge of typical development, to identify the neural mechanisms of face processing that may indicate ASD.

“I’ve always been fascinated by brain development,” Conte says. “I like the challenge behind collecting and analyzing data in populations that are less compliant by nature — infants can’t tell you what’s wrong.”

They can’t, but their brain data can.

Conte, a postdoctoral fellow in the John E. Richards Infant Development Lab, uses EEG, source analysis and white matter tractography — all methods of understanding brain organization — to examine the development of structural and functional relationships in the processing of faces.

This research is what landed Conte a National Institutes of Health career development grant. The funding will guide Conte through mentored research into an independent, tenure-track position.

“Stefania has been an outstanding postdoc,” says her mentor John Richards, a Carolina Distinguished Professor in the psychology department. “She is the first post-doctoral researcher at UofSC to gain this grant, and it is a noteworthy accomplishment.”

Long-term, Conte says she plans to continue working to integrate the functional and structural development of brain and cognitive skills.

“Recognizing faces is an evolutionary trait that has kept humans safe,” Conte says. “Facial processing and language processing have a lot in common. I want to find out how they interact.” 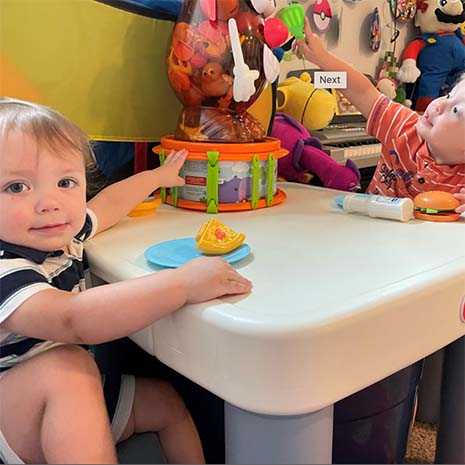 Mind and brain researchers at UofSC measure physiological and behavioral data in infants to look for early indicators of autism spectrum disorder.