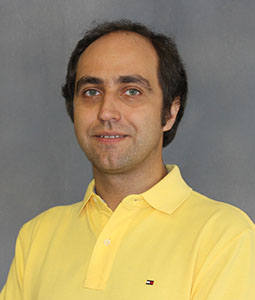 Research in the group involves the synthesis of molecular catalysts for activation of important substrates such as dihydrogen, carbon dioxide, and alkenes. Students with interest in catalysis, inorganic, and organometallic chemistry are encouraged to join. Group members will receive a rigorous training in inorganic and organometallic chemistry, catalysis, air-free synthetic methods, and spectroscopic methods.

Pre-Organized Lewis Pairs for Small Molecule Activation. We work on new modes of activation of organic substrates by a cooperative action of high-valent transition metal complexes and sterically hindered bases. Our recent findings include the novel activation of nitriles with direct formation of zwitterionic vinylimido complexes. The scope of the reaction includes a range of substituted unactivated nitriles.

Heterometallic molecular complexes for catalytic photoactivation of small molecules. Photocatalytic conversion of common inert molecules such as water and carbon dioxide is a focus of extensive research for solar energy conversion and sustainability. We design molecular heterometallic complexes and study their reactivity in photocatalytic activation of inert molecules such as CO2 as well as in organic synthesis.