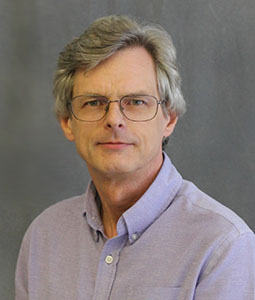 Ultrafast Laser Spectroscopy. The times that are important for molecular processes are fast.  Single-collision times in solids and liquids are near 0.1 ps; sound waves transmit conformational changes across protein in 10 ps; solar energy captured by a semiconductor nanoparticle persists no longer than a few 10's of ns. If we want to understand the macroscopic behavior of materials in terms of molecular properties, experiments on ultrafast time scales are required.

Although these times are natural for molecular processes, they cannot be measured by standard techniques. Ultrafast lasers are needed. In our laboratory, pulses with durations as short as 50 fs and with peak intensities in the 10 gigawatt range are used to investigate these processes. These pulses are only 15 microns in length and contain a only a few cycles of the electric field. Using these pulses, we observe events as fast as the breaking of a chemical bond or of a single collision in solution.

Multidimensional Kinetics for Complex Dynamics.  Molecules in complex materials often do not have a well-defined rate; the dynamics spread over a wide time range.  Either local heterogeneity or complex relaxation pathways can be responsible.  We have pioneered multidimensional kinetics as a way to disentangle these possibilities.  For ultrafast lasers, a sequence of six pulses (called a MUPPETS experiment) has been developed to measure 2D kinetics.  For single-molecule measurements and computer simulations, 2D and 3D correlation methods are being developed.   These techniques can measure the relaxation within a specific subpopulation, extract the distribution of subpopulations, and find the rate of exchange between subpopulations.

Our interest is not confined to a single material.  We seek problems where the complexity of the system demands new insights from advanced methods.  Current and future interests include (but are not limited to):

Energy Pathways in Nanostructures.  Semiconducting nanostructures offer great promise for harvesting solar energy, but no two nanostructures are ever identical at the atomic level. Lattice defects, variation in surface structure and misplaced passivating molecules are common.  They greatly affect energy flow, but are difficult to detect in structural measurements. MUPPETS offers a means to measure the different fates of energy in different particles within a real sample.

Ionic Liquids.  Organic, ionic liquids possess unusual macroscopic properties that make them exceptionally useful in new laboratory and commercial applications.  Our 2D analysis of computer simulations suggest that some of these properties arise from short-lived heterogeneity at the molecular level.  New MUPPETS experiments are being developed to test these predictions.

Glass Dynamics. Near the glass transition, there is strong circumstantial evidence that the liquid breaks up into microscopic regions of differing viscosity. Multidimensional analysis of single-molecule experiments measure these effects directly and quantitatively near the transition.  Polarization-resolved MUPPETS measurements can trace this heterogeneity to its origins at higher temperatures and shorter relaxation times.

Our research draws on chemistry, laser physics, statistical mechanics, spectroscopy, and biology to answer broad questions in chemistry, physics, and materials science. Growth into unfamiliar areas is expected and is facilitated by interactions with students and postdocs from a variety of fields.