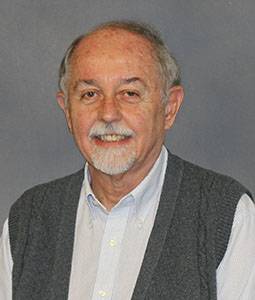 Research Areas:  Bimetallic Complexes for Applications in Catalysis; Studies of the synthesis, structures, and catalytic properties of unsaturated bimetallic clusters and nanoparticles for hydrogen activation and selective oxidation reactions.

Research:  The chemical industry relies on the use of reaction catalysts derived from the elements of the transition series for the economical production of many of the great variety of petro- and commodity chemicals in use today. Studies have shown that bi- and multimetallic catalysts often exhibit properties that are superior to those of the individual metal components. Synergism and bifunctional activity are two of the ways that this superior performance is achieved. It has been found that the addition of metals from main groups of elements, such as tin, can also significantly improve the activity and selectivity of transition metal (TM) catalysts still further. Our research has been focused on synthesizing bi- and multimetallic complexes for use a precursors to new stiochiometrically-precise multimetallic nanoparticles on supports for use as reaction catalysts. For example, we have recently shown that transition metal cluster complexes containing tin ligands are precursors to superior heterogeneous nanocatalysts that selectively hydrogenate 1, 5, 9-cyclododecatrene CDT to cyclododecene CDE. CDE is an important chemical feedstock for the production of polymers such as nylon-12.

We have also prepared some polynuclear iridium-bismuth carbonyl complexes, Ir3Bi(CO)9 and Ir5Bi3(CO)10 and have converted them into iridium-bismuth nanoparticles supported on mesoporous silica. Bismuth is known for its ability to produce oxidation and iridium is known for its ability to activate CH bonds. We have found that these new IrBi nanoparticles are excellent catalysts for the selective oxidation of the methyl group in the compound 3-picoline to convert it to nicotinic acid, also known as Niacin and Vitamin B3 by using acetylperoxoborate APB as the source of oxygen, image (2). We believe that these IrBi catalysts will have similar selective oxidation applications for a wide variety of hydrocarbon reactions.

Nano-gold has recently been found to be a valuable catalyst for selective oxidation catalysis. It has already been shown that high activity oxidation catalysts can be obtained by mixing gold with the more traditional transition metal catalysts. To expand upon work in this area, we have been synthesizing new bimetallic transition metal – gold complexes for the purpose if creating new bimetallic TM-Au catalysts for selective oxidation reactions. For example, we have prepared new iridium-gold and osmium-gold complexes by reactions of the organogold complexes (Ph3P)AuR, R = CH3 and C6H5 with activated forms of iridium carbonyl and osmium carbonyl, see images (3) and (4).