The Power of Mentorship

When Parker Rakotci’s parents visited him during his junior year, he walked them around the Horseshoe, took them to Midwood Smokehouse (his favorite restaurant), and introduced them to his former University 101 Instructor, Scott Kaplan. Scott has been a mentor to Parker since his first semester at Carolina. “Scott was one of my first instructors here as a freshman…I truly feel like he cares about my development not just as a student but also as a person and a professional.”

While Scott has played an influential role in Parker’s life, their relationship is not unique. According to a survey of former University 101 students, a little more than half of students still view their University 101 Instructors as a mentor even after their first-year.

We had dinner at [Scott's] house, and he welcomed us in with open arms...From that point on, I truly understood, not only who Scott was, but how much he was willing to go out of his way to make us feel comfortable.

The small class size and nature of University 101 puts instructors in a prime position to develop meaningful mentor relationships with their students. For Scott Kaplan, who has been teaching U101 for 24 years and is the Chief Financial Officer of the College of Hospitality, Retail, and Sport Management, creating an open environment where his students feel safe and heard is a priority.

According to another of his former students, Cara Baldwin, that environment is what led her to feel comfortable going to Scott for advice. “Scott is real and he’s open. I talked to him about my life and struggles because he talked to us in class about his life. He’s very relatable and that made it easier for me to open up to him.”

Parker was immediately comfortable going to Scott with questions and concerns because he knew his instructor viewed students as a priority. This idea was cemented for Parker when Scott had his class over for Dinner Dialogues. “We had dinner at his house, and he welcomed us in with open arms. It made me feel at home, and I felt like it was something my parents would do. From that point on, I truly understood, not only who Scott was, but how much he was willing to go out of his way to make us feel comfortable.”

I tell each of my students that my door is always open. Unless I’m in a meeting, they are more than welcome to come here any time. I have students who graduated many years ago that still text me life updates.

Parker and Cara were in the same University 101 class their first year and currently both serve as University 101 Peer Leaders. They represent just 2 of around 450 U101 students who Scott has taught. It is important to Scott that each of his students know he is there for them. “I tell each of my students that my door is always open. Unless I’m in a meeting, they are more than welcome to come here any time. I have students who graduated many years ago that still text me life updates.”

It is well documented that mentor relationships have a host of benefits for students’ personal and professional development. That said, the benefits vary based on the unique characteristics of individual students and instructors. For example, Cara shared that Scott has pushed her outside her comfort zone and has helped her reflect on her growth. During Cara’s sophomore year, she had an opportunity to study abroad in Australia, but was hesitant to take the leap. Scott was the one who gave Cara the push she needed. “I was freaking out. My mother was freaking out. My grandparents were freaking out. But Scott was calm and said you need to do this, and it kind of just clicked for me.”

When Cara returned from her trip, Scott was there to help her reflect on her growth. “Afterwards, when I came back, he was able to show me how much I changed. He noticed that, and I thought that was awesome. He’s been with me from the start of my walking on campus freshman year, and for him to notice a change in me was really kind of cool.” Cara also credits Scott with teaching her that it is okay to try new things even if they are scary.

For Parker, Scott has served as a professional role model and has helped him identify and lean into his strengths. “Being in his office and seeing how he interacts with other professionals in the school has encouraged me to take more of a leadership role both as a student and as a professional.” Parker also recalled an observation Scott made his junior year that has changed how he views himself as a student leader. “I remember this quote, he stated that although I never had a ton to say in class, when I did have something to say, people would listen, and that’s something that stuck with me ever since…Now I know that what I say matters, and I think I’ll carry that with me into my professional career.”

I’m not going to stay in college forever. Eventually, I’ll have to enter the real world, and Scott will be there for me then, too.

Like many University 101 Instructors, Scott works to continue his relationships with students past the first-semester. He continues using his class GroupMe, he emails a welcome back message when his students return for their second year, and he invites them to drop by his office. His students are eager to continue the relationship as well. Both Cara and Parker were confident that Scott would continue being an important part of their lives, even after graduation. Cara shared, “I’m not going to stay in college forever. Eventually, I’ll have to enter the real world, and Scott will be there for me then, too.” 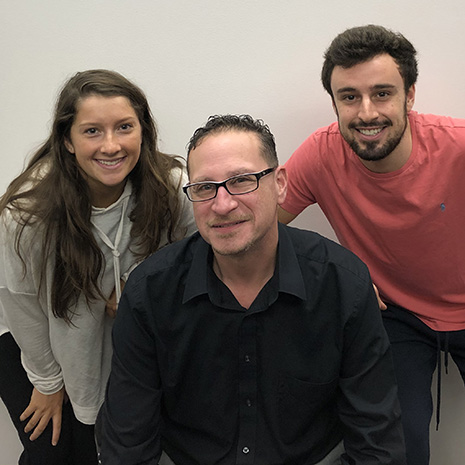