When Tish Guerin, MSW, LCSW, LISW-CP, graduated from the College of Social Work in 2010, she probably never expected to have an office at Charlotte’s Bank of America Stadium and work with Carolina Panthers football players. But with the National Football League’s focus on better mental well-being for players, Guerin was hired in September as one of the first full-time, in-house therapists in the league.

A 2017 report in the Journal of the American Medical Association found that Chronic Traumatic Encephalopathy (CTE) was found in 110 of 111 brains of deceased NFL players. Due to the nature of the sport, football players are at an increased risk for mental illness and CTE, a degenerative disease whose symptoms include depression, aggression, confusion and memory loss.

“I came from the standpoint of wanting to help people live balanced lives,” said Guerin. “When I focused more on the sports industry, there were signs leading up to a player’s meltdown or psychotic break. I wanted to be their advocate and sounding board to help prevent them from a meltdown, taking their own life, or hurting themselves or others. As a social worker, I wanted to make change.”

Guerin’s path to the Panthers began two years ago when she was in private practice and first pitched the idea of an in-house clinician to a contact at the NFL offices.

“My contact and I had not talked in a while when he called me and asked if he could send my name over to the Panthers,” said Guerin. “Mark Carrier, director of player engagement at the time and now advisor for the general manager, interviewed me for the director of player wellness position. I credit (Panthers owner) David Tepper, general manager Marty Hurney and head coach Ron Rivera because they recognized and wanted to address correlations of the mental health aspects and the physical components of being an athlete. I had no idea if or when my idea would even come to fruition, but I am pleasantly surprised.”

Guerin is responsible for supporting and advocating for players and their families through transitions and life hurdles, such as a rookie transitioning from college to the NFL or a veteran player preparing for retirement. She works with players on a variety of issues, including creating a healthy work-life balance.

“Just because a player comes to talk to me, it doesn’t mean anything is wrong or they’re having a mental health crisis,” said Guerin. “It could just be a ‘Hey, this is what’s going on;’ or ‘What do you think?’ to just have a general conversation about how to deal with the stressors of day-to-day life.”

According to Guerin, one of her goals for the position is to simply connect with players.

“I want them to know that I am ultimately here for their mental wellness needs,” said Guerin. “I’m not going to say mental health because that sometimes has a negative connotation. People want to assume they have a mental health issue, but that’s not always the case. I also want to build rapport, which is the most important aspect of any therapeutic relationship.”

Guerin also wants to integrate mental wellness initiatives throughout the entire year, not only during the Panthers season.

“It’s important to introduce programs with rookie development in order to integrate therapeutic interventions and mental wellness activities that players can carry with them throughout their career,” said Guerin. “The overall goal is to drop the shame and emphasize that it’s okay to not be okay.”

Earlier this year, former Panthers wide receiver Steve Smith Sr. publicly discussed his struggles with depression during his 15-year career. Guerin hopes her position will help players discuss any issues to help maximize their performance on the field and other areas of their life.

“Players may recognize that they can’t solve all their problems by themselves, so it’s important to have someone who they can go to for help,” said Guerin. “I want them to say things like, ‘Hey Tish, this is what I’m going though;’ ‘What do you think;’ and ‘Should I get more help?’ I want to be a resource for each player.” 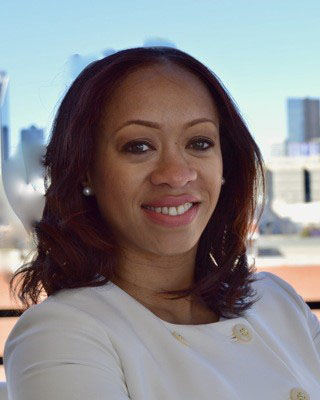 "The College of Social Work definitely taught me how to juggle multiple tasks, and I recognized there wasn’t anything I couldn't handle. I am incredibly grateful to USC and the college for taking a chance and saying yes to me so that I could pursue my education."