A critical smash when it premiered in 2014, this exuberant adaptation brings a comic, theatrical flair to Jane Austen’s perennial favorite. The Dashwood sisters — prudent Elinore and impulsive Marianne — find their world turned upside down after their father’s death, which robs them of their wealth, social standing, and most importantly, chances for marriage. As they struggle to navigate a life of little means and become entangled in complicated romances, the sisters must learn from their opposite temperaments to find true happiness.

…by far the smartest Jane Austen adaptation to come along since Amy Heckerling’s Clueless, and at least as much fun.

“My go-to catchphrase about this show is that it’s a frothy romp through a Jane Austen dream world,” says director Lindsay Rae Taylor, a second-year MFA in Directing candidate at the University.  “It’s light and airy and filled with love.”

Playwright Kate Hamill has become widely known for creating inventive and socially relevant theatrical adaptations of classic novels.  Her recent takes on Austen’s Pride and Prejudice and William Thacker’s Vanity Fair have been lauded as “traditional but…thoroughly modern” (The Wall Street Journal) and “imaginative [and] smart, with a feminist edge” (Philadelphia Inquirer).

“I think what Kate Hamill does really well with this adaptation is that she has placed a cinematic narrative in a playful, circus-like setting,” says Taylor. “You’re barely in one place before you move on to something else.  It’s almost like the play is a continual series of transitions. It’s a beautiful ribbon of storytelling that highlights the humor in Jane Austen’s writing.”

This filmic approach of quickly moving from scene to scene is realized on stage by a constantly moving set, as well as cast of actors working as an ensemble of storytellers, says Taylor.  “Because the whole set needs to have movement and things slide in and slide out, we only use what is necessary to tell the story and everything has a function,” she says.  “And, because we have an ensemble of actors on stage the whole time facilitating those changes, it’s almost like they’re directing our protagonists on their journey. It should be a really beautiful thing to watch.”

While the social complications of Austen’s story, set in the early 19th century, remain intact in the script, Taylor says modern audiences will still have a lot to relate to in this adaptation. “Kate Hamill has included a group of ‘Gossips’, which are a collection of chatty, heightened, high-society creatures who serve as a sort of Greek chorus for the play. They almost represent a version of social media, always observing and commenting on the action. It creates an atmosphere of always being watched, and often judged, sometimes preventing Elinor and Marianne from responding in the way they want because they are always conscious of how they are perceived.”

“I think people have an impression that Jane Austen is boring and stuffy, but Kate Hamill has proved that all wrong,” says Taylor. “She encourages you to be bold and silly with it. How lovely to go to a play and just let it wash over you, to see the actors having fun, and to want to partake in that, too.”

“I think it will make you fall in love with Jane Austen in a way you didn’t know you could.”

For more information on Sense and Sensibility or the theatre program at the University of South Carolina, contact Kevin Bush by phone at 803-777-9353 or via email at bushk@mailbox.sc.edu. 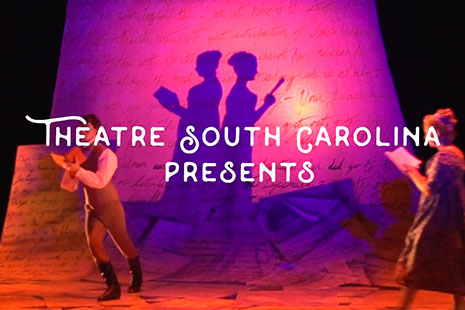 Preview of "Sense and Sensibility"

Watch an interview with director Lindsay Rae Taylor featuring clips from the show!