UofSC Associate Professor Peter Duffy has made it his mission to give students a firsthand understanding of the theatre arts, and his unique methods are giving new energy to a traditional survey course.

As described in the University’s Academic Bulletin, Theatre Appreciation (THEA 200) offers non-theatre majors a broad “understanding and appreciation of theatrical experience.”  In Duffy’s hands, however, it’s morphed into a hands-on opportunity to experience theatre in an immersive, interactive way.

Duffy, who has been teaching the course since he came to the University in 2008, says the new approach evolved as he realized that traditional teaching methods weren’t resulting in the kind of lasting knowledge he wanted his students to receive.

“I remember one semester seeing these students just plowing through the final exam,” he says, “and as they handed in their tests I thought, ‘Was this just a meaningless exercise?’  I didn’t know what they got out of it other than cramming terms and facts in their heads for two days that would likely be quickly forgotten.”

“My goal for Theatre 200 has always been…if it’s a Friday night and a student has nothing to do, I want them to think about going to a play.  That’s the ultimate goal.  So I’m trying to make theatre as real and accessible and immediate as possible.”

In Duffy’s model for the course, students are given ample opportunities to not just learn the facts, but also have personal interaction with the theatre world.  That enhanced connection takes the form of participation in acting exercises, taking tours of theatre facilities, and having Skype Q&A sessions with professionals in the theatre and film business.  In the fall 2015 semester, students were able to get firsthand information about life in the theatre arts from professional actors Tim Simons (SAG Award-nominated actor from Veep) and Brandon Ellis (Broadway shows Once and Company), and former film location scout (and one-time SC Film Office Director) Mary Morgan Kerlagon.

“I’ve been trying to find ways to make it immediate, accessible and real for students,” says Duffy.  “The Q&A’s are also a really good way for me to see how much the students are absorbing.  It ends up being a really interesting way to see how sophisticated the students’ understanding of theatre has become by the questions they ask.”

At the end of each semester, and in lieu of a final exam, Duffy’s students are required to put together an entire theatrical presentation as their final project.

“It’s a project where the class splits into groups,” he explains, “and as a class we pick a theme for all the groups to explore.  This semester, for instance, it was modern dating.  Then, each group has to conduct interviews on the subject with people outside of the class, and from that they pull out interesting ideas, phrases or entire sections of  dialogue, and they shape that into an 8-10 minute piece of theatre.  The final project is the performance of all the scenes arranged into a specific order.”

“It’s an amazing process,” he adds, “because from the inside out, the class puts together an hour-and-twenty-minute piece of theatre that never existed before.  Theatre is doing.  And if we’re not doing, then what’s the point?”

“What’s really great about what Peter is doing is he’s bringing his students to an understanding of the collaborative nature of theatre, and he’s doing so in an experiential learning style.  That’s something we strive for in all our classes,” says Professor Lisa Martin-Stuart, Chair of the Department of Theatre and Dance.

Duffy’s take on the course fits in with his larger mission of helping teachers facilitate learning by making their classrooms more interactive.  He has written/edited several books that incorporate that teaching methodology, including A Reflective Practitioner’s Guide to (mis)Adventures in Drama Education - or - What Was I Thinking?, and Youth and Theatre of the Oppressed.  He is currently developing his next book, Drama, Cognitive Science and Learning: Staging Embodied Instruction in Schools (Palgrave Press).  Duffy currently heads the Master of Arts in Teaching track for the theatre program, and serves as the Research Director for the International Drama/Theatre and Education Association (IDEA).

“The book I’m writing now is looking at how drama principles help activate not just the classroom but also the brain,” says Duffy.  “We experience everything through our bodies.  Everything that gets into our brain has to get there through our eyes, our ears, the way we touch — it’s an embodied experience.  Why we should make students feel like they have to express their learning through a completely disembodied experience makes no sense to me.”

In the end, he says, it’s all about fostering knowledge — and appreciation — that carries on for a lifetime.

“I don’t care if they remember what a proscenium arch is,” he says, “but I do care that they had a feeling about what it is like to be in a theatre and think about a play, and to be inside of it, and use our imagination, and work as a group.  I care about those things.  If they ultimately don’t remember who the Duke of Saxe-Meiningen* was, then I’m OK with that.”

*In case you don’t know the Duke, he’s often credited as being the first modern theatre director, whose work inspired Stanislavsky, whose work sparked a revolution in the art form in the 20th Century.  Thanks, Professor Duffy! 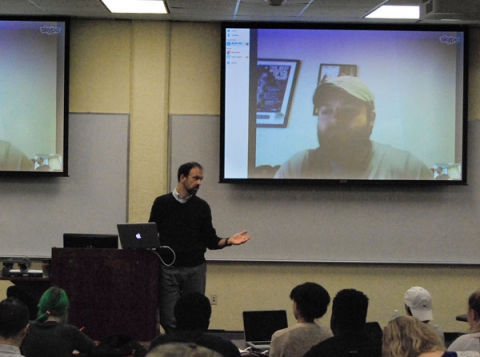