A school social worker and the Investigation Discovery channel may not seem to have anything in common. But they both had an impact for Master of Social Work Advanced Standing student Alexandria Devonish. She attended the State University of New York at Buffalo, where she earned her bachelor’s degree as a social work and criminal justice double major. As she is preparing to graduate with her MSW, the Brooklyn, New York native is looking forward to a career combining both of her passions.

Why did you decide to study social work?

How did you develop an interest in criminal justice and corrections?

“For as long as I can remember, I have loved watching crime shows, especially the ones on the Investigation Discovery channel. Crime and working with inmates became an interest of mine after studying more about why people commit certain crimes. I had to figure out a way to incorporate social work with the criminal justice system. That’s when I was introduced by my undergraduate advisor about possibly considering criminal justice as a second major. She put me in an intro to criminal justice class, and I eventually declared criminal justice as my second major with a concentration in corrections.”

Why did you want to attend the College of Social Work?

“I had always wanted to come to the South for school, but the scholarships offered for undergrad were not enough to afford tuition as an out-of-state student. I had to let go of that thought because of the financial need and not putting my parents through a financial hardship for me.

What classes had the most impact on your social work studies?

“I had to pick a specialization once I started last June, but there wasn't anything specific to criminal justice, so my best bet was health and mental health. I thought, 'What classes can I take that will give me some insight on the adolescent and brain development of how someone who experienced trauma would lead them to make criminal-like decisions when they became older. The psychopathology and psychodiagnostics classes have been very impactful. Professor (Patrice) Penney's trauma class helped me understand that while I still want to work with inmates, I would broaden my population to working with inmates with substance abuse and mental health illnesses.”

What do you enjoy most about the social work field?

“I enjoy is the endless amount of trainings you can attend once you are licensed. Social work is a field that requires you to always learn. It's not as if you get a degree and then have everything mastered. You continuously research extensively and put forth effort because things change daily. Depending on the population you are working with, you need to know how to appropriately advocate for them. Being aware of your community and the larger spectrum of things is important.”

How can you change someone’s misconceptions about social work?

“People sometimes don’t realize that social work is a give and take. You won’t always have your way with clients all the time, but that's not really the goal. It's more so of cutting down and limiting certain behaviors to show some improvement. That's enough for me to realize that they want to make a change. If more people understand that concept, perhaps the ideals and notions of the social work profession might change.” 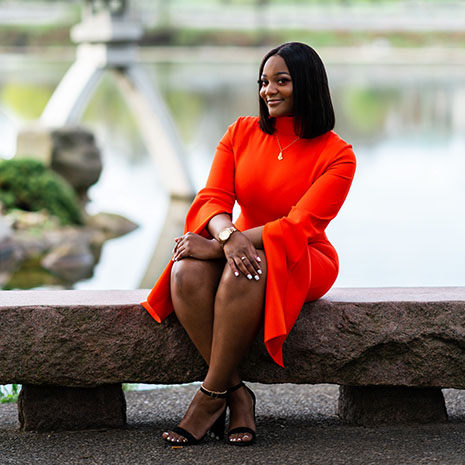 "Social work is a field that requires you to always learn, research and continuously put forth effort because things change daily."