While some students do not settle on majoring in social work until after one or two years of undergraduate studies, junior Tamiah Anderson has known she wanted to study social work since her freshman year. While the Greenville native could have majored in psychology at other schools, she knew that was not the route for her.

“I wanted to study social work because I've always been able to talk to people, enjoy helping people, and working with kids,” Anderson says. “Social work has everything I want to do in one major without settling in one area.”

“The faculty is understanding and even after I leave, I will likely stay in touch and maintain relationships,” Anderson says. “In some classes outside of my major, I couldn’t tell you the professors names and they probably don’t know my name either. But it’s good to know that I don’t have to worry here because our faculty will always be there for me.”

Anderson added that she has experienced some unforgettable classroom discussions and video assignments, and her social policy and diversity courses have been the most influential.

“I wasn’t too excited going into my social policy class, but I’ve learned more from that class than any other. It opened my eyes and showed me how much work involves policy,” Anderson says. “A policy may not affect someone negatively, so they may tend to ignore it. But people realize its importance after looking closely at different policies and its effect on people around them and in their cities. My diversity class has also made me reflect on myself and helped me in the way I think, see who I am, and how I identify as a social worker.”

Anderson has also started to integrate the lessons and theories learned in the classroom and applying them to a professional setting. The College of Social Work’s Field Education Office placed Anderson at Central South Carolina Habitat for Humanity, where she is already benefitting from working alongside professionals and witnessing social work in action.

“On my first day (February 4), one of the directors drove me around Columbia to see the homes they’re building, and the neighborhoods being revitalized,” Anderson says. “I even went to a client's house and helped paint the porch while meeting some clients who were being helped that day.”

According to Anderson, she likely would not have selected Central South Carolina Habitat for Humanity and ReStore as her field placement if she had the opportunity to choose. But she is happy at her current field placement because it is out of her comfort zone, which will lead to more learning opportunities.

“I want to broaden my understanding of people. It's easy to be stuck in your own world and not see when other people are suffering,” Anderson says. “It’s important to be comfortable with clients and give them the resources they need. Since I'm under the supervision of the communications and grant coordinator, I also want to learn how to create grant proposals to put an organization in position for providing those resources.”

The College of Social Work has also provided Anderson with the opportunity to advocate for her classmates by serving on the undergraduate program committee.

“My classmates voted for me to represent them. A big part of social work is advocacy, so I felt this would be a great opportunity,” Anderson says. “You don't see the behind-the-scenes part of the program when you’re a student, but (BSW Program Coordinator) Dr. (Brent) Cagle is great about asking for our opinions and takes that into consideration for each meeting.”

Cagle described Anderson as a committed and optimistic student. She believes those qualities are not only important for succeeding as an undergrad but for also providing help and resources for individuals, families and communities in need.

“Personally, I would not want to be in a position of need and have someone not fully committed to me,” Anderson says. “Being committed to learning how to be a social worker is important because I don't want to miss anything. Having a commitment to the work and soaking up everything is important, and I see evidence of that in my field placement. I want to have that commitment now so that I can give the best help and resources to my clients when I become a social worker." 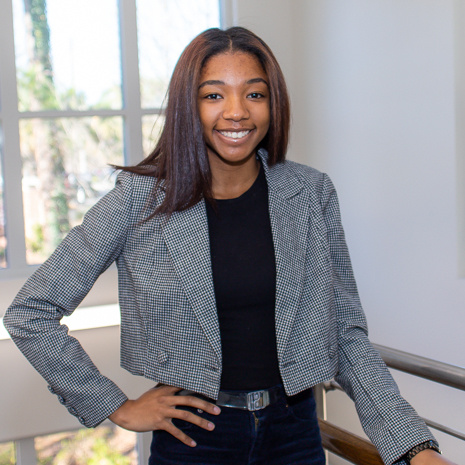