According to the National Coalition Against Domestic Violence, 1 in 3 women have experienced some form of physical violence by an intimate partner. On a typical day, 20,000 phone calls are placed to domestic violence hotlines nationwide. Earlier this semester in October, which was Relationship Violence Awareness Month, Bachelor of Social Work senior Elle Murphy led a supply drive to support a local women’s shelter for victims of domestic abuse.

Located in Columbia, Sistercare provides services and advocates for domestic violence survivors and their children. They also promote prevention of domestic violence through community awareness and training. Sistercare is the only organization that specifically offers shelter and support services for survivors and their children in Richland, Lexington, Kershaw, Newberry and Fairfield counties.

Murphy started her field education last semester at Sexual Assault and Violence Intervention and Prevention, which is a service of the University of South Carolina’s Student Health Services. She wanted to organize the Sistercare drive after Erin Woods, a current Master of Social Work Advanced Standing student and former SAVIP intern, led the same donation drive last year.

“Last semester, Erin gave me advice and summarized all of the events she worked on,” Murphy says. “She gave me insights on her reflections, such as anything she would have changed. That helped on where I wanted to take things and what would be beneficial to Sistercare and the campus.”

Woods set up four drop-off locations for last year’s drive from October 1-15. Murphy increased the number of donation boxes to nine and extended the drive throughout October. She collected nearly 200 items that were delivered to Sistercare’s donation closest last month.

“Last year’s Sistercare drive was critical for Erin’s work, so I wanted to do it again because it was successful,” Murphy says. “Bringing awareness on campus for a student who may be experiencing domestic violence or knows someone who has was very critical in this drive.

“I was really impressed with the efforts of the students and faculty. It was heartwarming to take the extra step to donate. That inspired me to extend the outreach and help with advocacy.”

While the donation drive provided essential supplies, it was also a learning experience for Murphy.

“I didn't realize the amount of resources and partnerships, and how pervasive the issue of domestic violence is in society,” Murphy says. “People talk about domestic violence, but I didn’t really understand just how many people and families are affected. That was important to highlight, and it encouraged me to make sure I made an impact on campus.” 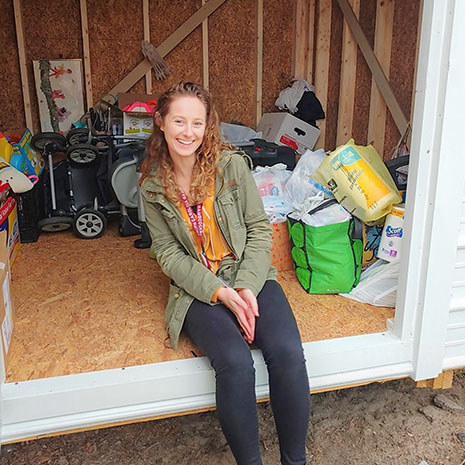 "It was important for me as a BSW student to raise awareness and do outreach on campus."