Professor Sue Levkoff has taught at five universities for 40 years. During that time, she has served as director of university institutes and centers and presented nationally and internationally on gerontology and aging. Her publications have also been cited more than 8,000 times.

In recognition of Levkoff’s accomplishments as a scholar and practitioner for achievement and advancement of social good in the field of social work, she will be inducted as part of the Class of 2019 Fellows of the American Academy of Social Work and Social Welfare (AASWSW). The induction ceremony will be held on Jan. 18, 2019 during the Society for Social Work and Research’s annual conference in San Francisco. The Academy is currently headquartered at the College of Social Work with Dean Sarah Gehlert serving as president.

Levkoff was nominated as an Academy Fellow by Professor Emeritus James Lubben of the Boston College School of Social Work. Nominees must receive a majority of the 124 voting Fellows for selection. Levkoff is one of 21 new Fellows who will be inducted in January.

“It’s a huge honor to be nominated and selected by colleagues,” said Levkoff. “Instead of one or two people at an organization saying, ‘let’s go with her,’ it’s a group of people who are quite representative. When I looked at some of the Fellows who I’ve worked with in the past, the idea that they voted for me was a real surprise and a very special honor.”

Levkoff has taught at the College of Social Work since 2010. Recently, Levkoff and Professor Daniela Friedman of the Arnold School of Public Health were awarded a P30 program grant from the National Institute of Aging at the National Institutes for Health to establish the Carolina Center on Alzheimer’s Disease and Minority Research.

“I just do my work and love my job, so the idea of being considered among the other Fellows is very special,” said Levkoff. 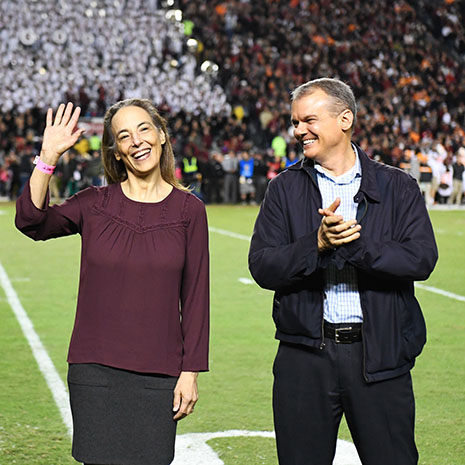 Professor Sue Levkoff acknowledges the Williams-Brice Stadium crowd during the first quarter of the Gamecocks contest against Tennessee on Oct. 27, 2018. Levkoff was recognized for her selection as an American Academy of Social Work and Social Welfare Fellow.