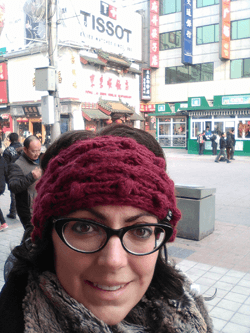 Krista Van Fleit teaches courses in modern/contemporary Chinese literature and film as well as Chinese language courses. In both her teaching and research she strives to present a sympathetic understanding of culture in a period of China’s history in which both people’s lives and the art they produced were greatly affected by political events. Dr. Van Fleit’s first book, Literature the People Love, provides students and scholars with a new interpretive framework to approach texts of the Maoist period.

Currently, Dr. Van Fleit is fascinated by the cultural connections between China and India. She recently spent six months in residence at Jawaharlal Nehru University in New Delhi on a Fulbright-Nehru Academic and Professional Excellence Award researching her new book project, which focuses on film exchange and cultural production in China and India. Her first article from this project, a study of the reception of Raj Kapoor and the blockbuster film Awara in China, was published in Asian Cinema in January 2014, and two more articles related to the project, “Mao and Gandhi in the Fight Against Corruption: Popular Film and Social Change in China and India,” and “Uncle Aamir: Translating Hindi Film Stardom in China,” are currently in progress. Dr. Van Fleit spent six months in Spring 2016 in China with the support of a Provost’s Humanities Grant where she wrote chapters about the use of “national forms” in China and India in the 1940s and the reception of Indian film in China in the 1980s, and gave a talk at Beijing University on the biopic Dr. Kotnis ki Amar Kahani for a class on the cultural legacy of Yan’an in the Chinese department.

“‘The Law has no Conscience’: The Cultural Construction of Justice and the Reception of Awara in China,” In Asian Cinema 24.2 (January 2014): 141-159.
“Sisterhood at the Nexus of Love and Revolution: Coming-of-Age Narratives on Both Sides of the Cold War.” In Frontiers of Literary Study in China 6.1 (January 2012): 511-531.
“Zhong Xinghuo: Communist Film Worker.” In Chinese Film Stars, edited by Zhang Yingjin and Mary Farquhar, 108-118. London: Routledge (2010).
“Different Roads to Industrialization: Chinese Realism in Taiwan and the People’s Republic.” In Popular Culture in Taiwan: Charismatic Modernity, edited by Marc Moskowitz, 52-64. London: Routledge (2010).
“The Heart of the Party: Language, Gender, and Politics in Tracks in the Snowy Forest.” Modern Chinese Literature and Culture 21.2 (Spring 2009): 72-101.
“People’s Literature and the Construction of a New Chinese Literary Tradition,” Journal of Modern Literature in Chinese 9.2 (2009): 87-107.