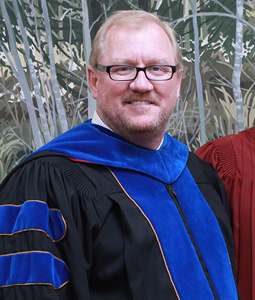 Mike Sonntag grew up in a small farming and ranching community on the Gulf Coast Plains of Texas, west of Houston. He is a first-generation college student and received his B.A. in psychology from Baylor University in 1989. He met his wife, Jennifer, while attending Baylor, and after they married they moved to Fayetteville, Arkansas, where Mike attended graduate school and obtained an M.A. in Clinical Psychology and a Ph.D. in Experimental Psychology in 1997.

His first academic appointment took him to Lander University in Greenwood, South Carolina, where he taught in the Department of Psychology, served as Director of Assessment and Planning, and served as Chair of the Department of Psychology. In 2007 he accepted the position of Vice President for Academic Affairs at the University of Maine at Presque Isle (UMPI), and in 2010-2011 he served concurrently as Acting Executive Director at the Maine School of Science and Mathematics and Vice President at UMPI.

Mike is a member of the South Carolina Psychological Association, Tuomey Fellows, and Rotary International. He is an honorary commander at Shaw Air Force Base, serves on the Shaw-Sumter Community Council and has served on a variety of community development boards and committees.

Mike’s research interests are varied and include young children's understanding of life and death concepts, the cognitive underpinnings of metaphor and irony comprehension in young children, the development of paranormal beliefs, terror management theory, and the scholarship of assessment and teaching.

In February, 2014 Mike left Maine to assume the role of Palmetto College Regional Dean at USC Sumter. Mike’s wife is an Accountant and currently serves as CFO at Sumter Utilities, Sumter, SC. The Sonntags have two children, a son, Greyson (1999), and a daughter, Sarah (2014). His hobbies include reading, gardening, cooking, and spending time with his family.