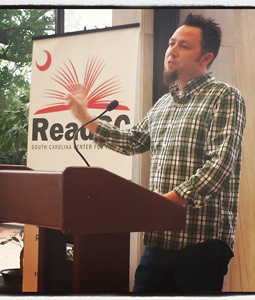 Teaches or has taught the following courses

Driving through the country before you are born, poetry, University of South Carolina Press, April 2007

“Smoke Signals,” “When the Men are Talking,” “Finding Teeth in the Yard,” “Jacking It,” “Pioneer Diorama” TalkingRiver, forthcoming 2018

“Cave Art” and “Whatever the opposite of Extinction is” Cold Mountain Review, Forthcoming

“Once We Considered the Alternative” Fall Lines IV, Summer 2017

“Post Op,” “There is a Risk of Swelling, Bruising, Tenderness,” The Healing Muse, Fall 2016

“For the Hardest to Reach Places” Prairie Schooner, Summer 2016

“When a Dog Comes Back Rabid,” “We Were All Dead Once,” Natural Selection,” Red Truck, Spring 2016

“Ask Your Doctor,” Origin of Species,” In the Absence of Protection,” The Descent of Man,” The Dead Mule School of Southern Literature, Spring 2016