What does civic engagement look like at South Carolina?

CZ: We use the term “active citizenship”— actively engaging in your community — and for us it’s nonpartisan. Just students involved in some aspect, regardless of level and regardless of party. We just want them to have active roles in their community.

How did it become a focus of the Leadership and Service Center?

AH: For years we had celebrated Constitution Day and run voter registration drives. But when it came to civic engagement, it stopped there. When we were looking at our mission and our purpose and what we uniquely deliver for students, we were able to hone in on student organizations, service and leadership programs pretty immediately because those are big buckets. But then we were looking at the other offerings that we gave to campus, and we have some of these voter registration and civic engagement initiatives that didn’t seem to naturally align with those buckets. But we also saw a great opportunity to go deeper into civic engagement, particularly with service and leadership in action — preparing students to exercise that beyond their time here at Carolina. And so we identified civic engagement as the fourth big bucket, and it has the most room and potential for growth.

How has that growth begun?

AH: The most important thing to get this up and running was the creation of the peer leader group to help guide the work because in the LSC we believe that our programs should be driven by students, not by staff members. Particularly as we’re going into civic engagement, nonpartisan work, it’s important that students are driving that agenda, not professional staff members. So we created the team, the Civic Leadership Education and Action Team — CLEAT for short.

CZ: Our three main goals that we were hoping to accomplish with them were to have programming that was studentled, nonpartisan and year-round.

AH: Year-round is important because we saw that we were just doing voter registration drives around elections. Around the midterms, things would pick up, and then things would go dormant and pick up again around the presidential elections, and then go dormant. But civic engagement truly is a year-round effort.

CZ: And even with voter registration, our data showed that there would be a spike in registrations, but not necessarily follow-through on voting. There would be excitement, but not necessarily the literacy about the process or any of the policies around voting. We have maintained voter registration as a focus area but added a speaker series and deliberation programming. We always do a civility series with the members of Carolina Judicial Council to integrate the Carolinian Creed into active citizenship, and we’ve done Congress to Campus, including visits to classes and lunch-and-learns with our staff to talk about what it’s like as professional staff members facilitating this work. Our civility series included [South Carolina representative] Micah Caskey, [former South Carolina representative and current CNN political analyst] Bakari Sellers and Josh Dawsey, an alumnus who’s a reporter for The Washington Post.

AH: We’ve had some really cool speakers, but the priority is to make sure that perspectives are balanced across the political spectrum.

CZ: Depending on where we are in the political cycle, members of one party or another are more likely to accept our invitations to speak. Even our student political organizations — we invite every one of them to participate in our events, but not every one of them comes, and that can look bad, like we didn’t include everyone even though we tried to. It can create some anxiety among the staff — the perception that people have when we really are trying to include all perspectives.

What makes a student want to join the CLEAT peer group rather than a student organization for a political party or a particular issue?

CZ: The students I’ve talked to about this specifically, they’re not sure what they believe in terms of political party affiliation. They know they care, and they know they want to be involved, and they know it’s important, they just don’t know necessarily where they should be putting their efforts. And so they put their effort into getting other people excited to care about something, and that’s where they thrive. And that really mirrors our center. No matter what students are passionate about, we just want them to be passionate about something, and we want to give them the tools and resources and space to fulfill that. Sometimes passion can turn to discord.

What’s the tone of conversation at South Carolina?

AH: I haven’t been to any of our events that have gone off track or become uncivil. The way that we facilitate events, we acknowledge viewpoints and keep the conversation focused on the issue. It’s our responsibility to model the behavior. If you’re ever going to explore and learn this, ideally college is the place where you’re exposed to different trains of thought and you’re exposed to how to be civil while still having your perspective.

What’s in store for the future?

AH: We’re always assessing what we’re doing. Every time we do something, how did it go? Is it meeting the mission? And as we continue to look at institutional initiatives like My UofSC Experience and Graduation With Leadership Distinction, for me, I look at how these programs feed into the university culture that we’re building. I want to make sure that we’re creating experiences for students that are meaningful and are guided by reflection and feedback.

CZ: We have a lot of foundational pieces to still develop with this being only the second year, so what I want to do is to strengthen what we have for another year or so and then potentially take new ideas from there. The benefit of working with students is that they’re always creative, and they have great ideas, so we always leave room for things to bubble up that students are excited about. 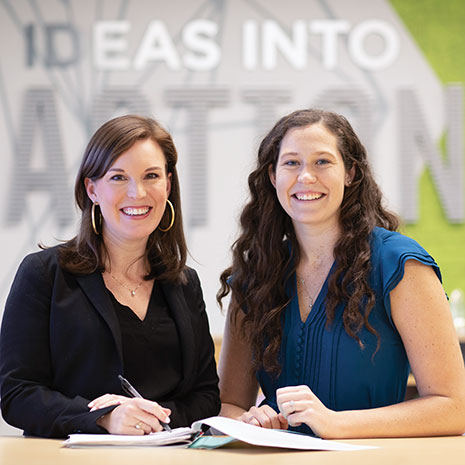 A conversation with the Leadership and Service Center’s Ambra Hiott, director, and Carly Zerr, leadership coach