Psychology 228 (Laboratory in Psychology) is a capstone class for psychology majors and minors. The main goal of the course is the completion of an independent research project, which the student develops themselves from idea to data analysis over the course of the semester. The instructional team is led by faculty member Dr. Melanie Palomares and dedicated graduate students. The 2019-2020 graduate student team consisted of Wendy Chu, Kristin Kirchner, Samantha Langley, Jaleel McNeil, Jonathan Rann, and Daria Thompson.

Students were encouraged to develop a study based on their personal interests such as social media, interpersonal relationships, or exercise. Following certification in human subjects training, the students collected data by deploying surveys and assessments to their target demographic. Students analyzed and interpreted their data using SPSS, a statistical software. Students then wrote a full length, APA style research paper about their project. Students from this class acquired several skills such as responsible research conduct, survey creation, statistical software analysis, and professional writing. This class provided the opportunity for undergraduate students to preview the graduate student research experience. The students published here went the extra mile and prepared their research papers for this publication, which often included additional, more sophisticated data analysis and new research questions.

Data was collected through self-reported measures of intellectual humility from the participants and their answers to questions testing for decision-making ability in a single survey. A Google Form was created for the survey. The study was conducted by sending a link to this Google Form out to the participants via email, social media, or text. The survey had 25 questions (3 for testing decision-making ability and 22 for testing intellectual humility). It took around five to ten minutes to complete.

The questions for testing decision-making ability were from the Cognitive Reflection Test (Frederick 2005). The CRT uses three questions designed to have an intuitive but wrong answer that participants must overcome to arrive at the correct answer (Appendix A). This measure also relies on numeracy, a strong predictor for effective decision-making (Sinayev & Peters, 2015). The answers from the respondents will be coded on a three point scale based on the amount of questions they got correct. 3 will indicate good decision-making ability, 2 will be less on, and so on. Each participant will have an individual CRT score.

Survey results were analyzed with a test on SPSS software. This test was a Pearson’s correlation to determine the relationship between CRT scores and scores on the intellectual humility scale.

A Pearson’s correlation analysis was conducted on CRT scores (M= 1.47, SD= 1.191) and scores on the Intellectual Humility Scale (M=103.94, SD= 14.591). Results showed that there was a significant positive correlation, r (30) = 0.38, p < .05. The scatterplot of the data demonstrates this positive relationship between decision-making ability and intellectual humility (Appendix C).

The findings from this study also add to the literature about the CRT. Previous research has found a connection between the cognitive ability to reflect on an intuitive answer and decision-making ability (Frederick 2005). Numeracy also plays a significant role in the effects of the cognitive reflection test on decision-making ability (Sinayev & Peters, 2015). Intellectual humility also appears to be related to the CRT.

This study has multiple limitations. The participants were not randomly sampled, limiting the generalizability of the results. They were instead recruited through convenience sampling. The participants were only college students, further limiting generalizability. The sample size was only at a small to moderate level of 32 participants. The gender ratio was largely skewed towards females. The three-item version of the CRT was used, which may have limited the ability to properly capture decision-making ability. Future studies may want to use a more in-depth version of the CRT for measuring decision-making ability. Overall, the study was limited in generalizability despite capturing an effect.

I am a junior from Irmo, South Carolina. I am a Psychology major and Philosophy minor. My career goal is to pursue a Ph.D in cognitive psychology or cognitive science and continue further research in the field, particularly in the area of decision-making. My motivation for this project came from an interest in understanding how people can make more objective decisions. Being able to admit to intellectual shortcomings seemed like a natural way to look at things more objectively by mitigating the bias that comes from overestimating one’s knowledge, so I wanted to test if there was a correlation. Working on this project has enhanced my professional pursuits by giving me the opportunity to create and conduct my own research project in psychology for the first time. I thank my mentor, Kristin Kirchner, for assistance with the project and manuscript, and Dr. Palomares for teaching the Psyc 228 class I did this project for.

Appendix A. Table containing the questions for the Cognitive Reflection Test.

Appendix B. List of questions on the Intellectual Humility Scale. 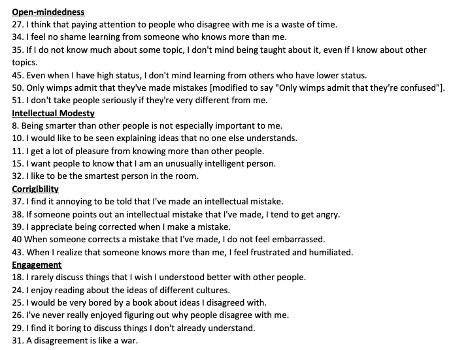 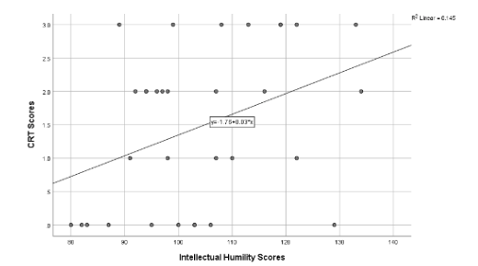