In America today there is great concern about obesity. In an attempt to balance a busy daily life with a healthy diet, consumers are now relying on artificial sweeteners to help them make a small step to a better lifestyle. With this notion in mind, there is the question of whether these artificial sweeteners are healthy. This paper discusses the effects of artificial sweeteners on weight and caloric compensation, and considers some hypotheses regarding the reasons for weight gain.

There are approximately 149.3 million Americans, aged 20 and older, who have a body mass index (BMI) of 25 or more (American Heart Association [AHA], 2011).  BMI is calculated by dividing weight in kilograms by height in meters, which assists in determining obesity (Must, Dallal, & Dietz, 1991). The cost so far in 2011 for obesity is estimated at over $254 billion (AHA, 2011). The purpose of this research will attempt to answer the question: Is the replacement of sugar with artificial sweeteners an effective strategy for weight loss?

According to Gearhardt, Corbin, and Brownwell (2009), implications involving dopamine is hypothesized to be a causative factor for obesity. Gearhardt et al. (2009) reported that out of 353 Yale undergraduates, 11% met the study’s criteria based on the requirements of the Yale Food Addiction Scale for food dependence. Students surveyed reported a persistent desire to cut back on food intake and consumed food in large amounts despite harmful consequences, all of which could be signs of food addiction. (Gearhardt et al., 2009). Wang et al. (2001) found that ten morbidly obese individuals, defined by the Centers of Disease Control and Prevention as having a BMI of 40 or more, weighing from 275-389.4 pounds at BMI range of 42-60, had lower levels of dopamine, a neurotransmitter that motivates us to eat, in the “reward” areas of their brains than did people who were of normal weight (Centers for Disease Control and Prevention [CDC], 2010).

The reason that obese people reach appetite satisfaction slower when they eat is because their brains release less dopamine when eating (Liebman, 2012). As a result of the lower level of reward perceived, obese people want more and more food because they never reach a level of satisfaction.  One food that is highly addictive is sugar. Liebman (2012) gives the example that when animals eat sugar they overeat and eventually become tolerant to sugar, thereby having to eat more to get a feeling of satisfaction. It can be hypothesized that in order to break the cycle of dopamine and the sugar addiction, switching from sugars to artificial sweeteners could result in obese people losing weight from not chasing that “sugary high.”

Exceeding the ADI of acesulfame-potassium is not difficult considering the large volumes that are available, such as those that can be purchased at convenience stores. For example,  “Big Gulp” or “Biggie Size” sodas each hold 42 to 44 ounces of diet soda that contain artificial sweeteners (Whitehouse et al., 2008). This shows that depending on the amount of acesulfame-potassium ingested, negative health effects could ensue when dosages ingested are above ADI.

The research that I found was from literature reviews from USC-Columbia databases, CINAHL and Academic Search Premier.

Raben et al. (2002) concluded that the human participants in the sucrose group gained 1.6 kilograms or 3.52 pounds, while the artificial sweetener group lost 1.0 kilogram, or 2.2 pounds. The researchers hypothesized that one primary reason that the sucrose group gained more weight than the artificial sweetener group is that 70% of sucrose was ingested from liquids, and were easier to over-consume than solid foods.

The first study Swithers et al. (2010) conducted found that rats fed a saccharin diet gained more weight than the rats fed a glucose diet. The researchers in this group used the Pavlovian conditioning model that suggests that “tastes and other orosensory cues…evoke not only food intake, but a variety of hormonal, neural, and metabolic conditioned responses that prepare for … the efficient utilization of energy” (Swithers et al., 2010, p.56). Using this model, researchers proposed that if there was a reduction in the ability for tastes to predict caloric intake, then it would alter the effectiveness of the bodies’ response to energy regulation.

One group received 30 grams of plain unsweetened yogurt on some days and 30 grams of yogurt sweetened with 20% glucose on other days, while the other group received plain unsweetened yogurt on some days and yogurt sweetened with 0.3% saccharin on other days. The results showed at the end of five weeks that rats in the saccharin fed group did not signal an increase in the calories of the yogurt. In turn, the saccharin fed group gained more weight compared to the rats in the glucose fed group when sweet taste did provide a valid signal for calories. Figure 1 shows these results. 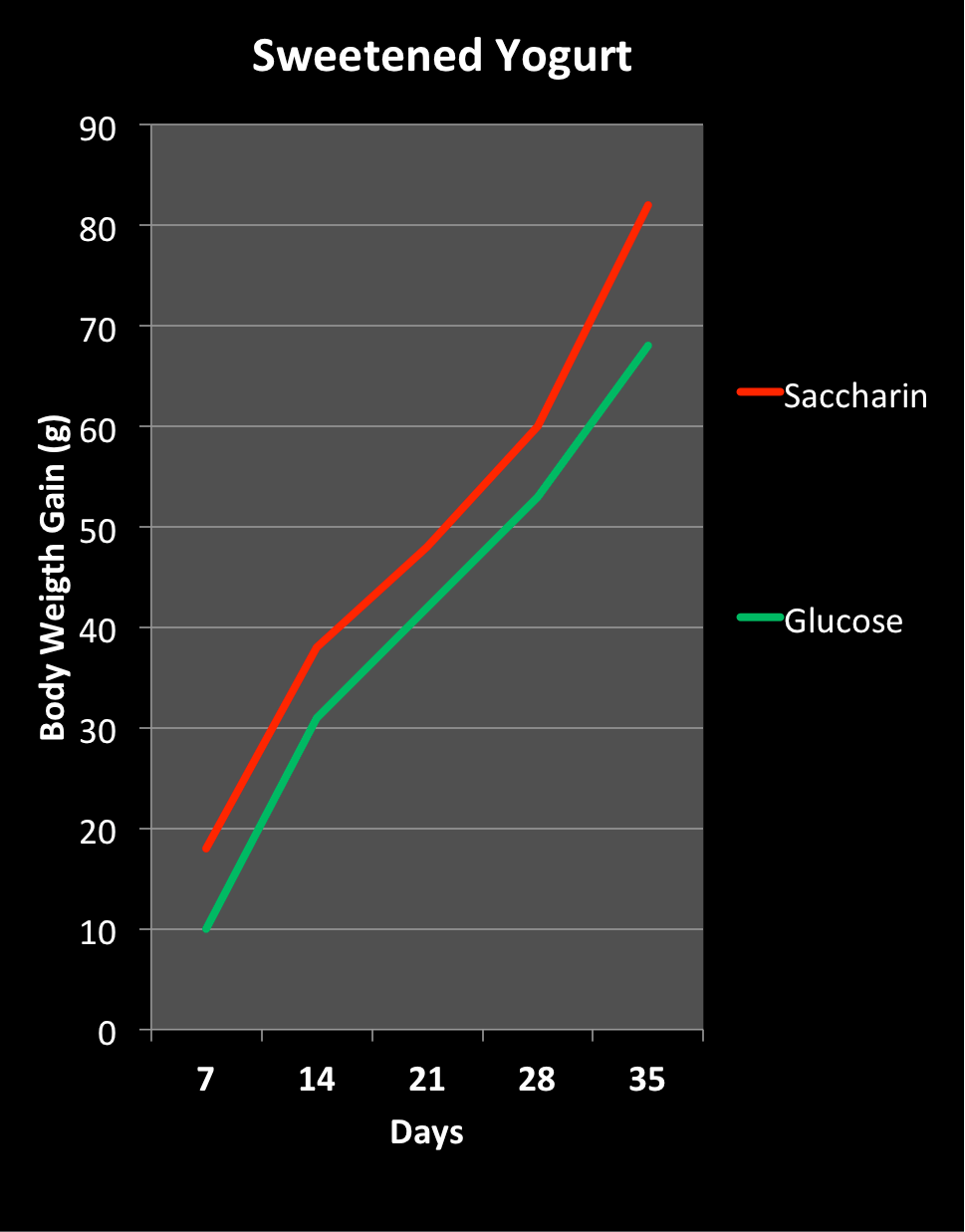 The second study by Swithers et al. (2010) found that a saccharin diet fed rat group consumed more calories and had a weaker caloric compensation than the glucose diet fed rat group. Caloric compensation as defined by Swithers et al. (2010) is when “animals adjust for calories consumed on one occasion by reducing their caloric intake at subsequent opportunities to eat” (p.57). A weakened caloric compensation, where animals do not compensate their other meals after eating one meal, could result in excess calories accumulated. For example, a typical American Thanksgiving holiday lunch consists of turkey, dressing, beans, rice, gravy, macaroni and cheese, and desserts. Usually by the end of the meal, the eater would have ingested a high accumulated amount of calories. To compensate for such a large Thanksgiving lunch, the following meals would be at a lower calorie level to not add to the already high level of calories ingested. If a person had a weakened caloric compensation, after eating the large Thanksgiving lunch, they would continue to eat meals high in calories, which would accumulate to high calories eaten overall by the end of the day. 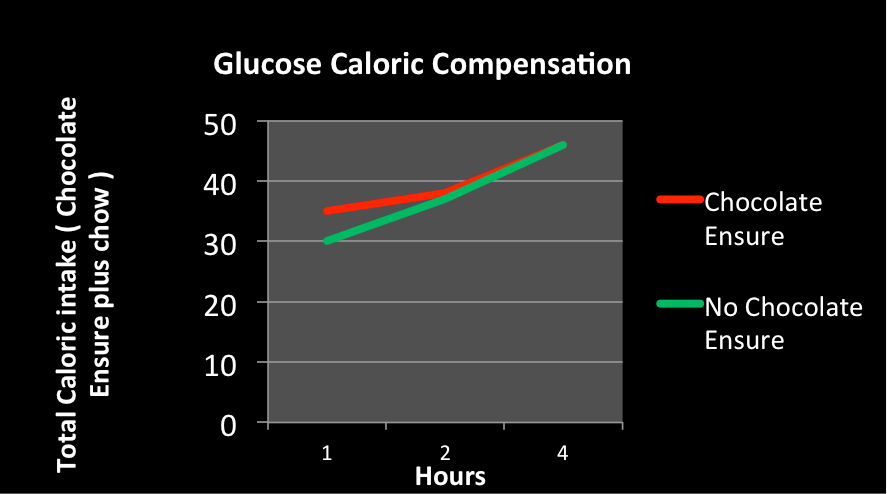 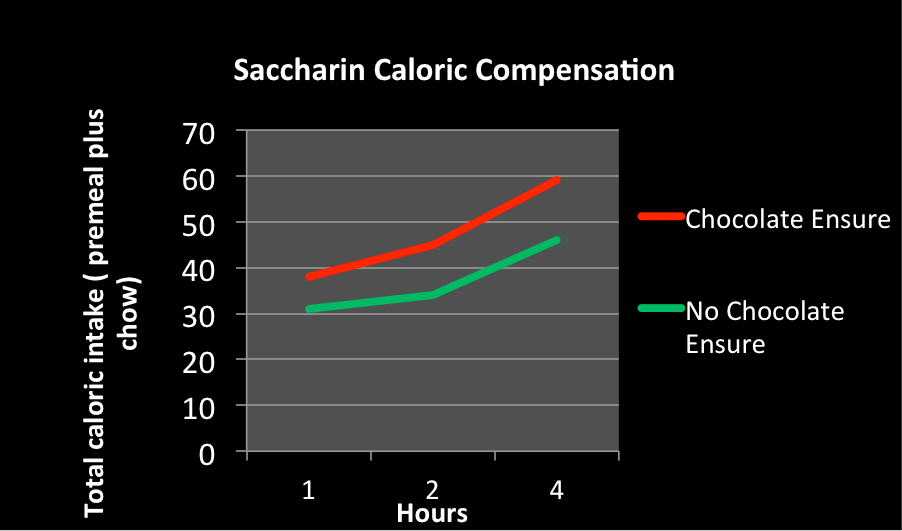 Figure 2: The saccharin-sweetened diet group of rats, who had been trained that a sweet taste did not mean more calories from the food item, had a weakened caloric compensation, and also a higher total caloric intake, after eating a Chocolate Ensure meal and afterwards eating rat chow. In comparison, the glucose-sweetened diet group had fewer calories eaten after the Chocolate Ensure meal in which sweet taste did predict increased calories.

The third study by Swithers et al. (2010) compared 0.3% acesulfame potassium, 0.3% saccharin, and 20% glucose. The results of the study showed that not only do artificial sweeteners, such as saccharin, influence weight gain, but other artificial sweeteners may make a person gain weight. Acesulfame potassium is labeled under such names as Sunsett, Sweet and Safe, and Sweet One and is a popular artificial sweetener that can be found in Coke Zero, Pepsi Max, and Minute Maid Light (Swithers et al., 2010). The study compared the three groups to see which group would have the most weight gain. The study had three groups of rats that were given 23-hour access to unflavored yogurt for 7 days then 7 days of access to yogurt sweetened with an artificial sweetener during which time the rats were trained that a sweet taste did not mean more calories from the food item. The results showed that the weight gain from the saccharin group and the acesulfame potassium group was similar and both had gained more weight than the glucose group. Figure 3 shows these results. 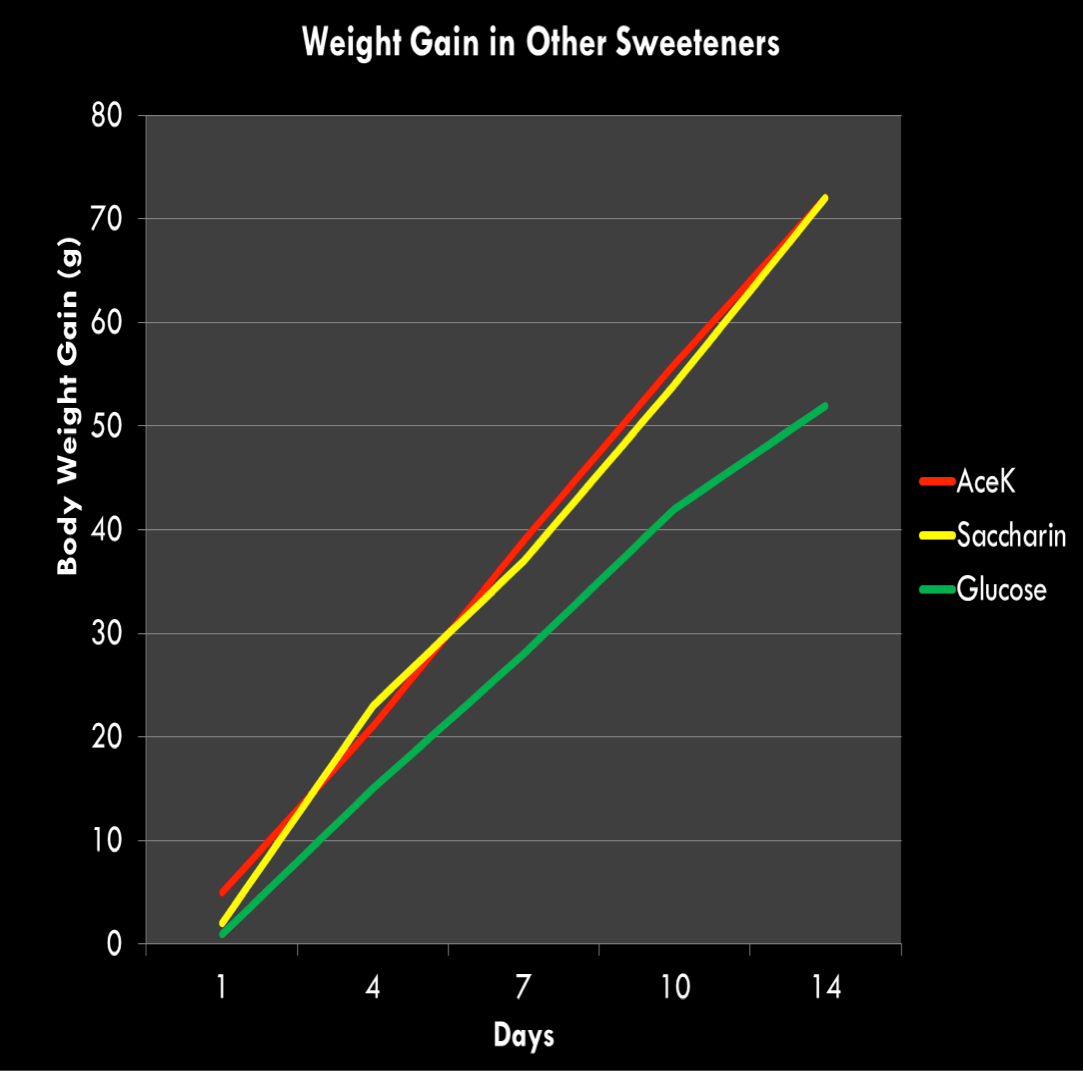 Some hypotheses of why Americans are gaining weight were found during my literature review. Karras (2012) cited a study stating that artificial sweeteners can raise insulin levels and lower blood sugar, which may stimulate hunger and move existing calories into fat cells to be stored.

Another study found during my literature search showed that heat properties that the body produced during the ingestion of food related to the amount of calories being ingested (Swithers et al., 2010). The study done by Swithers et al.(2010) tested the amount of heat produced from a saccharin fed diet rat group compared to a glucose fed diet rat group. They hypothesized that the heat produced from the body after nutrients were ingested prepared the gastrointestinal tract for nutrient utilization and maintaining homeostasis. They believed that a larger amount of calories would produce more heat and a lower amount of calories would produce less heat.

When these two rat groups were given the same product, Chocolate Ensure, a high caloric value food, to see how their body temperatures would react, the saccharin group had a lower body temperature increase than the glucose group. The results suggest that artificial sweeteners may disturb the physiological effects of how the body prepares for incoming calories and calorie utilization in the body.

It leaves no doubt that once the tolerance level of sweetness from artificial sweeteners is built into a person’s appetite, the person continues to chase after the “sugar high”, which eventually may lead them to obesity (Bellisle & Drewnowski, 2007). This is seen in a study by Swithers et al. (2010) in which rats that were fed the artificial sweeteners saccharin and acesulfame potassium gained more weight than rats that were fed glucose. Another study done by Swithers et al. (2010) found evidence that the amount of heat produced from the body to prepare food for the gastrointestinal tract is disturbed when a body is conditioned to eating a regular diet of artificial sweeteners, which can interrupt the natural occurrence of calorie utilization by the body.

Health care providers need to inform their patients of the ambiguity surrounding artificial sweeteners and their use when starting a diet plan for weight control. When individuals are planning to start dieting for weight loss, the nurse should include a plan of how to decrease the amount of calories consumed daily and also implement a plan for physical activity with the help of their primary health provider (Whitehouse et al., 2008).

In the future I plan to conduct a more extensive literature search to strengthen the conclusion of the studies that I found during my literature review. Additionally, since there are constantly new sweeteners being introduced to the market, I would research those sweeteners and see how they are metabolized and how they affect the body in longitudinal studies.

Following graduation, I plan to work a year as a registered nurse. Afterwards, I wish to spend two years in the Peace Corp and then later apply to the University of Colorado Denver for my master’s degree in the Family Nurse Practitioner program. I chose to research this topic after noticing how primary care providers encourage their diabetic clients to substitute sugar for artificial sweeteners as an intervention to improve the management of glucose levels. In result of doing research on this topic, I have become more conscious of artificial sweeteners in food and have encouraged others to be also. I would like to thank Dr. Kevin Elliott, Professor Iris Walliser, Dr. Linda Heraldo-Gacad, and Dr. Julia Ball. I would also like to thank the TRiO Ronald E. McNair Postbaccalaureate Achievement Program for supporting me through my research.

Centers of Disease Control. (2010). Morbid Obesity as a Risk Factor for Hospitalization and Death due to 2009 H1N1. Retrieved from http://www.cdc.gov/h1n1flu/in_the_news/obesity_qa.htm