Psychology 228 (Laboratory in Psychology) is a capstone class for psychology majors and minors. The main goal of the course is the completion of an independent research project, which the student develops themselves from idea to data analysis over the course of the semester. The instructional team is led by faculty member Dr. Melanie Palomares and dedicated graduate students. The 2019-2020 graduate student team consisted of Wendy Chu, Kristin Kirchner, Samantha Langley, Jaleel McNeil, Jonathan Rann, and Daria Thompson.

Students were encouraged to develop a study based on their personal interests such as social media, interpersonal relationships, or exercise. Following certification in human subjects training, the students collected data by deploying surveys and assessments to their target demographic. Students analyzed and interpreted their data using SPSS, a statistical software. Students then wrote a full length, APA style research paper about their project. Students from this class acquired several skills such as responsible research conduct, survey creation, statistical software analysis, and professional writing. This class provided the opportunity for undergraduate students to preview the graduate student research experience. The students published here went the extra mile and prepared their research papers for this publication, which often included additional, more sophisticated data analysis and new research questions.

It is no secret that in recent years, women are delaying having children. Historically, women started to have families at younger ages than some women do today (Hird et al., 2000).  Today, women are having children later in life, and it is particularly interesting to see if the desire of wanting children at a specific age varies in early adulthood. There has been an increase of women delaying motherhood from their twenties to thirties in industrialized countries (Wiebe et al., 2012). There are many different reasons why some women are choosing to delay starting families. The phenomenon of women moving away from starting traditional families could be due to furthering their education, beginning their career, or other personal reasons such as women’s right to control their reproduction (Allen et al., 1992).

In a pre-modernity time period, women traditionally had children without question, but in the present day, women are gaining more control in the decision of if and when to have children (Hird et al., 2000). Previous research has found that, of college graduate women, there was an increase in the likelihood of starting a family at ages 30 and older (Abramowitz, 2017). The data of college graduate women was discovered through studying mandated insurance coverage of assisted reproductive technology, such as in vitro fertilization which helps with fertility issues, to explore the relationship between women’s timing of starting a family and the cost of using this technology. Likewise in Sweden, the contributing factor of women delaying having children is the increased number of women pursuing higher education (Svanberg et al., 2006). Although fertility in women declines with age, the average maternal age of American women continues to increase (Gossett et al., 2013). The present study hypothesizes current college students will have a desire to have children later in life compared to their mothers. College education and career goals could have an influence in explaining why women are delaying starting families. The current study was aimed to investigate whether or not college students have a desire to have children at a different age than when their mothers had children.

The survey asked for the participant to state their age in years. The survey was not timed, but the anticipated time to complete the survey was five minutes. Each participant completed the survey on Google Forms. The questions asked on the survey are included in the appendix. Age was separated into five levels: 19, 20, 21, 22 and 23. Comparing the differences between each age group was completed primarily because the ages 19, 20, 21, 22, and 23 were the ages represented in the sample. It was unclear whether or not there would be a pattern in the data appropriate for a correlation or linear regression; there may also have been a change in the data somewhere between those aged 19 and those aged 23. Because the possible pattern was unclear, comparing the potential differences between each age was the clearest approach to interpret the findings. To score the measures, the ideal age participants want to have children was averaged and compared to their mother’s age when she had her first child.

This study ran a one-way between-subjects ANOVA and a paired samples t-test. The ANOVA ran between the age of the participant (19, 20, 21, 22, and 23) and their ideal age to have children. The other analysis was a paired samples t-test that compared the means of the participant's ideal age to have children to the mother’s age when she had her first child.

The results of both the one-way between-subjects ANOVA and the paired-samples t-test were not statistically significant. Figure 1 displayed there is not a significant difference between college student’s ideal age to have children varying between the ages of 19, 20, 21, 22, and 23. The study found there is also not a significant difference between a college student’s ideal age to have children and the age of the participant’s mother when she had her first child (Figure 2). Overall, there is more similarity between college student’s ideal age to have children than there are differences. These results did not support the hypothesis that college students will prefer to have children later in life compared to their mothers. Much of the data regarding women delaying starting families is focused on graduate age women or women who are beginning their careers. The present study is unique by surveying undergraduate college women in order to investigate their ideal age to have children later in life. The hypothesis was motivated by past research that indicates a shift in the age women have children does exist, but it did not successfully detect when this shift occurred. According to Allen et al., women are moving away from starting traditional families (Allen et al., 1992). Explanations for this shift could be due to continuing education, careers, or reproductive rights (Allen et al, 1992). It is possible the sample size of this present study had too young of participants. Perhaps the results would have been different if the sample size were college graduate women or women already beginning their careers.

A limitation of this current study is the sample size was limited to college students only, and it is possible that the participant’s opinions may change once they graduate college. While men were not excluded from the study, the survey received an extremely low response rate from male participants; because of this, males were removed from the sample to prevent a confound of biological sex. The lack of diversity in biological sex serves as an additional limitation for the present study. In the future, a larger sample size might lead to results more representative of college students. Since the data found in the present study was not statistically significant, it indicates college students have homogenous ideals about what age to begin having children that reflect the age of their mother when she had her first child. Many factors could contribute to the similarity of college students and their mother’s sharing relatively the same ideal age for having children such as family background, level of education, resources available, etc.

A recommendation for further investigation could be to include graduate students in future study, or survey an older generation. Graduate students would likely be older than students who participated in the current study. Older students could provide a wider age range of participants that could result in a different preference for students ideal age to have children. Since the participants in the present study were of traditional undergraduate age, this similar age range could account for the shared ideal age to have children. Another explanation for the results not being statistically significant could be because the generation of college students surveyed in the present study are not the generation who are having children at a later age. Perhaps the generation who had children at an older age are the parents of the current sample’s participants. Collecting data from an older generation could be useful in detecting where the perceived shift in the age of having children actually occurred.

My name is Corrie Sanders, and I graduated in May of 2020 from the University of South Carolina with Leadership Distinction in Research. I earned my Bachelors of Arts in Experimental Psychology with a minor in advertising and public relations. I am originally from Georgia, but I have lived in Blythewood, South Carolina for the past eight years. I am currently in the process of applying to law school for fall of 2021. I am certified in human research and social and behavioral responsible conduct of research by the Collaborative Institutional Training Initiative (CITI). Training by the CITI Program was completed prior to conducting this study.

I am interested in women’s history and how the role of women in society has changed over time. This study was inspired by my interest in investigating the perceived shift of women having children later in life than traditionally seen in history. This project was a study completed for Laboratory in Psychology, a final course in the undergraduate psychology program at UofSC.

This experience was valuable to my Graduation with Leadership Distinction pathway as well as excellent practice for future research I will assist with in law school. I would like to thank Tristen Scartozzi, who served as my research partner for this study during our semester of Laboratory in Psychology. And a tremendous thank you to my TA, Kristin Kirchner, who served as my mentor on this project during and after the course. 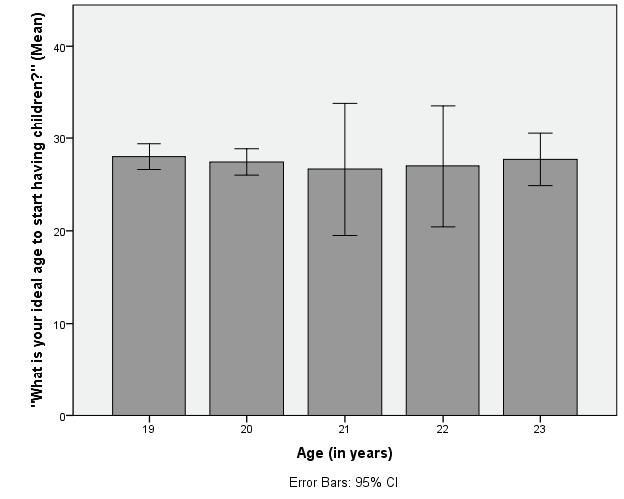 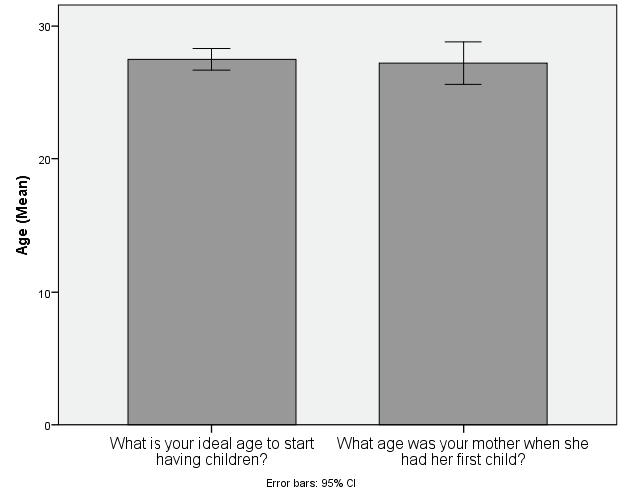 Do you have children? (Participants had the option of selecting either: Yes, no, or I prefer not to say)

If so, what age were you when you had your first child? (Participants answered by writing the age in short answer text)

Do you plan on having children at some point in life? (Participants had the option of selecting either: Yes, no, or I prefer not to say)

What is your ideal age to start having children? (Participants answered by writing the age in short answer text)

What age was your mother when she had her first child? (Participants answered by writing the age in short answer text)

What age was your father when he had his first child? (Participants answered by writing the age in short answer text)