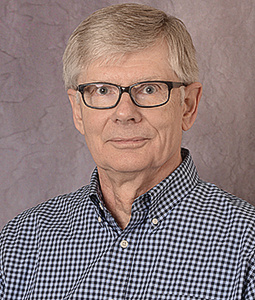 Dr. Showman's research concentrates on the cellular and molecular regulation of mitochondrial function and replication. Use is made of advanced microscopy and molecular approaches to determine how both normal and defective cells (myopathies) control or fail to control mitochondrial activity and distribution. There are two major projects within the laboratory. The first uses the marine blue mussel Mytilus sp. as a model organism for examining how mitochondrial DNA replication is regulated. For this organism there are two genetically distinct mitochondrial haplotypes that replicate at different times and at different rates during early development. Since both mitochondrial haplotypes are found in the same cell, this suggests that mitochondrial DNA itself contains critical information necessary for initiation and cessation of mtDNA replication. Our DNA sequence analysis has, in fact, confirmed the existence of haplotype-specific, conserved mtDNA sequence elements which are now being examined for how they interact with nucleus-encoded components of the mtDNA replication machinery. Another aspect of mitochondrial function being examined using the blue mussel model is how specific mitochondria are targeted to specific cells resulting in mitochondrial heteroplasmy within the adult cell population. The second project in the laboratory examines the nature and role played by the single mitochondrion found in the blood borne pathogen, Leishmania donovani. Leishmaniasis, along with African Sleeping Sickness and Chagas Disease which are caused by closely related pathogens, are major endemic diseases of the Third World where they disfigure, disable and kill hundreds of thousands of individuals annually. The mitochondria of these and similar protozoa differ significantly in their role and biochemical function when compared to those found in mammals. This is particularly true of the mitochondrion's role in the regulation of apoptosis, or programmed cell death, and in mitochondrial DNA-encoded protein synthesis. We are using the unusual mitochondrion ofLeishmania as a platform for the study of how mitochondrial function can be disrupted in a species-specific manner. Current projects include an examination of the role the electron transport chain plays in the production of reactive oxygen species and the induction of apoptosis, and the role played by the mitochondrial translation machinery in the maintenance of mitochondrial function and cell viability in these pathogens. By understanding how these mitochondria differ from human mitochondria at the molecular level, we hope to identify new drug targets for exploitation in the worldwide, ongoing program to eliminate tropical diseases that kill millions of individuals annually.