A vast film collection at the university offers a trove of research materials.

The University of South Carolina’s Moving Image Research Collections has seen some changes over the years, but the vast archive of film and video footage has been an invaluable resource from day one, attracting scholars and artists from around the world for more than three decades.

Each year, MIRC receives nearly 200 requests from directors and producers seeking footage that ranges from the iconic to the obscure. Even documentary filmmaker Ken Burns turned to the archive while producing his PBS miniseries “Prohibition.”

The collection is one of the most extensive in the nation; only UCLA’s is larger, and MIRC is always looking for more acquisitions.

“Over the past couple years, we’ve been pleased to acquire media produced by USC faculty and students in our Science and Nature and Regional Film collecting areas,” says MIRC director Heather Heckman. “We would be thrilled to see more donations from the USC community.”

Now housed in climate-controlled vaults in a nearly 40,000-square-foot warehouse about a mile from USC’s historic Horseshoe, MIRC also provides researchers at Carolina access to resources that have fueled projects across a range of disciplines.

Media arts professors Simon Tarr and Heidi Rae Cooley, for example, have each relied on MIRC for recent projects — Tarr using MIRC wildlife footage in a film that premiered at Columbia’s Indie Grits Film Festival in 2012, and Cooley delving into MIRC’s Scott Nixon collection while researching her recently published monograph, “Finding Augusta: Habit and Governance in the Digital Present.”

“The extraordinary footage housed in MIRC has permitted me and my students to add important historical and visuals details to our research,” Donaldson says. “What I find most exciting about my collaborations with MIRC are the continued discoveries of materials, events and topics that set the stage for new course assignments and research topics.”

And it’s not just artists and historians. Even mathematics professor Pencho Petrushev has been drawn to the possibilities. He and a team from the Interdisciplinary Mathematics Institute recently worked with MIRC curator Greg Wilsbacher to develop open-source software for reproducing sound from digitized film images.

The original Fox newsreels have been augmented by, among other additions, donations of footage from Columbia-area television stations shot between 1959 and 1978. The collection holds a particularly rich source of footage of civil rights leaders and rallies from the era.

The Fox Movietone collection has continued to reveal historical gems over the years, from the discovery that a young airmail pilot in a routine newsreel story was actually Charles Lindbergh before he became famous, to the realization that outtakes of a news story about Babe Ruth returning to the Yankees lineup after an illness happened to contain footage of Lou Gehrig in the dugout — on the very first day of his record-setting streak of 2,130 consecutive games played.

USC biology professor emeritus John Herr was instrumental in bringing a selection of Roman Vishniac’s prodigious output to the university, including film and stills of his pioneering work using microscopy in the study of nature. Vishniac is well known as a photographer and cinematographer who documented Jewish culture in Europe before WWII and the Holocaust, but his formal education included biology, which is amply demonstrated in a portion of the Science and Nature collection. MIRC’s science and nature holdings also include a vast collection of footage from what is now the South Carolina Department of Natural Resources, and a growing cache of film donated by USC faculty.

USC’s Confucius Institute and the College of Arts and Sciences were instrumental in helping the University Libraries bring in a huge cache of motion pictures from the People’s Republic of China in 2009.

Nearly 2,000 titles came to the university from the Chinese embassy in Washington, D.C., and from the worldwide headquarters of the Confucius Institutes. Film footage provided by the embassy, which is still being processed, provides a view of what Chinese leadership wanted Americans to see of their country and is an important resource for scholars studying diplomacy through public outreach.

Perhaps the most eclectic of the four collections, the regional films include materials from the S.C. Arts Commission, films from the USC athletics department and home movies filmed by a wide range of individuals, such as philanthropist Archer Huntington and his wife, noted sculptor Anna Hyatt Huntington, and WIS-TV photographer Jim Covington.

‘Regional’ is actually a bit of a misdirect as a catch-all title for this collection. Although obtained from inhabitants living in or near South Carolina, the films themselves can depict nearly any geographic locale. Home movies, particularly of wealthy or prominent citizens, frequently document travel throughout the country and all over the world.

Scott Nixon, a resident of Augusta, Ga., who always packed a camera on his frequent travels, captured 16-mm and Super-8 film from the 1930s to the 1970s and edited the footage into short movies of his own. One of these, “The Augustas,” was one of just 25 films selected by the Library of Congress in 2012 for inclusion in the National Film Registry; “Breakfast at Tiffany’s,” “The Matrix” and “A Christmas Story” were fellow selections that year.

The Scott Nixon collection, which found a permanent home at MIRC in 2000, is just one example of a variety of home movie holdings in the regional film collections of MIRC. The happy coincidence of the right people seeing it at the right time turned an obscure group of movie reels into a nationally recognized collection of enduring cultural value.

Art lost in the attic

MIRC is pushing to expand its home movie collections further, particularly as the home movies shot in 8-mm and Super-8 in the middle of the 20th century continue to slowly deteriorate in metal cans stored in attics across the country.

Using an ASPIRE-III grant from USC’s Office of Research, MIRC has acquired a device that can rapidly transfer the small-format films used by amateurs to digital media. With the new equipment MIRC can now quickly digitize home movies, and donations are starting to flow in more often, whether from the annual “Home Movie Day” held every October or from interested parties who contact the curators directly. It’s hard to say what might come into the archive next, but if the past is prologue, there are many unexpected treasures that MIRC will soon bring to light.

USC’s Moving Images Research Collections dates back to 1980, when 20th Century Fox transferred more than 11 million feet of film — some 2,000 hours of footage—to the university. The collection, which features newsreels and outtakes from 1919 through 1934 and 1942 through 1944, includes all of Fox’s silent newsreel footage from the 1920s, as well as the Movietone News reels from the sound era beginning in 1928.

From a media historian’s perspective that’s the celluloid motherlode — but it wouldn’t be here were it not for a relationship between then-USC faculty member Jim Jackson and legendary broadcaster Lowell Thomas, who narrated the Movietone newsreels and also worked with S.C. Educational Television on a PBS series in the 1970s called “Lowell Thomas Remembers.”

Until 2009, the collection was known as the Newsfilm Library. After years of continual growth and diversification, the full archive, now containing more than 6,000 hours of recorded material, was renamed MIRC and organized as four collections: newsfilm, Chinese film, science and nature film, and regional film collections. 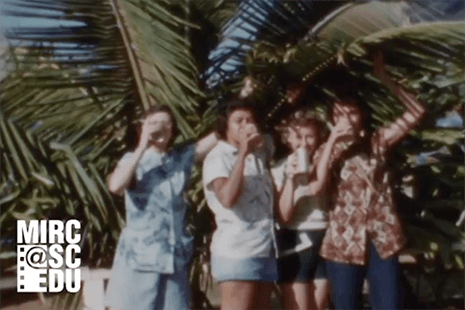 Snapshots from the collection

Click the thumbnails below to view stills from MIRC's film collections, and read more about them