In academia, landing a $2.1 million grant is pretty exciting. But will it make you truly happy?

USC assistant professor of philosophy Jennifer Frey and co-PI Candace Vogler of the University of Chicago landed just such a princely sum this past fall, and they’re hardly bummed about it. Their pursuit of happiness, however, is really just beginning.

In fact, that’s what the two-year grant is all about. Awarded by the John Templeton Foundation, it is being used to study the connections between virtue, happiness and the meaning of human life. “Templeton likes the big questions,” says Frey, who hopes the grant will open a range of interdisciplinary inquiry.

What the psychologists are finding is that the less that people focus on themselves and their own needs, the happier they are.

The team, which includes assistant professor of religion Mari Stuart, is organizing six public lectures and a series of working meetings at Carolina and in Chicago, and will bring together 30 scholars from psychology, religious studies and philosophy.

“There’s an important connection between being good, being happy and finding meaning in one’s existence,” she says. “What the psychologists are finding is that the less that people focus on themselves and their own needs, the happier they are. Human beings really are fulfilled when they are working towards something that transcends themselves.

“Part of our research is getting psychologists and philosophers talking about how to run empirical studies, frame the questions, develop the conceptual grounding and interpret the data.” 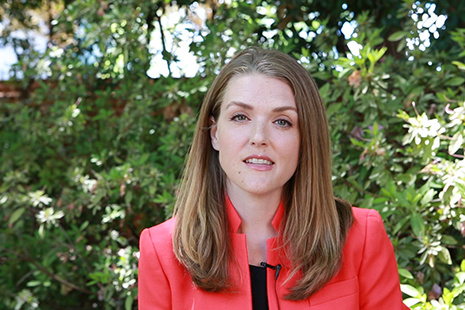 Dr. Jennifer Frey talks about her work on the "Virtue, Happiness & Meaning of Life" project, funded by The John Templeton Foundation. Jennifer Frey is the Co PI along with Candace Vogler from the University of Chicago.