Earlier this year, a group of researchers led by Arnold School of Public Health professor Julius Fridriksson received an $11 million grant from the National Institutes of Health to study aphasia therapy. It was the latest in a string of high-dollar research grants Fridriksson has helped land in his ongoing effort to understand and improve treatment for the disorder, which adversely affects a patient’s ability to use language, usually following
a stroke.

First, can you define aphasia — in the simplest terms?

At the most basic level, aphasia is a communication problem. It’s caused, almost always, by damage to the left hemisphere of the brain. Certain areas of the brain are involved in processing speech and language, both comprehending and speech production. When stroke affects these areas, it causes an impairment.

Also, it ranges from very mild — difficulty coming up with the right words — to more severe forms where the person is almost mute and/or has a difficult time understanding other people when they speak. There are different types of aphasia, and they are very much related to what parts of the brain are affected.

This latest NIH grant involves several participating institutions. Can you break down the different studies this grant will fund at USC?

The grant includes four projects — two here, one at Johns Hopkins and one at the University of California, Irvine. My main project here at USC is focused on chronic patients who had a stroke a year or more ago. We do an intensive work-up, look at all aspects of their brain structure and function, and use both behavioral data and brain imaging data to predict outcome. That takes eight weeks, and we’ll do about 150 patients over five years — a very large patient sample when it comes to aphasia treatment studies.

The other project at USC is with Chris Rorden, my main collaborator here. That’s a project to use all of the data we’re collecting. When you include both behavioral data and neuroimaging data, you’re talking about millions of data points. We’re trying to predict outcome in the same way that Google uses algorithms to search online except that we are searching our database to come up with the best prognosis for treatment outcome.

The Johns Hopkins trial is a direct replication of a trial we have ongoing in my lab and at MUSC. It deals with acute and sub-acute patients — patients who just had a stroke — to see whether we can use electrical brain stimulation to enhance the outcome of aphasia treatment. The idea is to try to increase activation in areas of the brain that we think are crucial for language. We hope we’re improving the atmosphere in that part of the brain for taking over certain functions that were lost due to stroke. Our trial was funded by a $5 million grant from the NIH four years go and will conclude next March. The goal was 74 patients, and we’re now enrolling the 64th.

What are you hoping to accomplish as you take your research to the next level?

We now understand that the brain is very plastic, that you can sometimes recover years after brain injury. That recovery never stops unless you start to become demented. That has changed our outlook. Therapy has not improved nearly as much as I think it should, and that is because we have been limited by these very small studies. That’s why this big grant is so crucial. It will give us much more reliable results as far as outcome and who is a good candidate for therapy.

The other thing that has been huge for us is the improvement in neuroscience. Once you start understanding how the brain works, you’re better able to offer treatment.

The South is often referred to as the Stroke Belt. How does the incidence of stroke here affect your research?

Being here is fantastic for my research, but it’s fantastic for a really bad reason. We have a lot of participants in our studies because the stroke rate here is so high. Another unfortunate distinction is that half of all strokes that happen in S.C. happen to people who are under the age of 60. Most of the people who get involved in our research are 65 and younger, and the youngest are in their 20s, which is really bad. If you have a stroke and you’re just 27 years old, you will live with a disability for the rest of your life. You might live another 50 years, but your quality of life has just gone completely out the window — and not just your quality of life but your family’s quality of life.

It can be difficult for someone unfamiliar with stroke and aphasia to understand what’s happening in the brain of a stroke patient. As they struggle to communicate, are we witnessing a cognitive problem or a retrieval problem?

That’s a great question. The chief complaint that we get from people with aphasia is that they know what they want to say; they just can’t get the words out. A family member or loved one will say, “Well, he’s lost his memory.” No, he can remember that this is a magazine or that’s a chair. He just can’t remember the word for magazine or for chair. In most people those words are still intact, the person just cannot pull them out. So it’s more of a retrieval problem than a capacity problem. Having said that, there are people who have lost the words, but those people are fewer than the people who still have them.

At the risk of oversimplifying your research, is the basic idea to try to get the part of the brain that is normally used for comprehension to take over for the part that has been damaged?

That’s a really tough one. This has been debated for about 150 years, since that first case that described speech impairment as related to left frontal lobe damage. Some people think that the right hemisphere takes over for the function that was lost. We think that the residual areas of the left hemisphere are what have to be retrained. What are those areas exactly? We have a very poor understanding of that.

But your idea when it comes to aphasia therapy is that the focus does need to be on the left hemisphere as opposed to the right.

Yes, but this is a great controversy. I’m one of the people that thinks that the right hemisphere actually hinders improvement. It just does not seem capable of taking over lost language functions. What remains of the left hemisphere after brain injury — that’s what needs to take over for what was lost.

There’s already been some progress made in aphasia therapy, and your previous studies have been promising enough to warrant greater and greater funding, including this latest grant. In the long term, how might future stroke patients benefit from the work you and your collaborators are doing now?

When we find people who really won’t benefit from therapy, we want to focus on counseling. Counseling is extremely beneficial, not just for the patient but also for caregivers and loved ones. It can significantly improve quality of life. When people come to the hospital, they don’t have any previous experience with this. They have a lot of questions, and they need something more than 20 minutes with the neurologist or the speech pathologist. 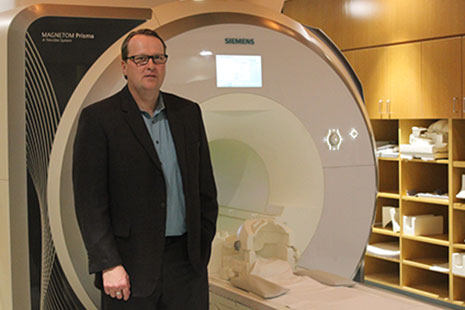