USC archeologists are part of a team that has found compelling clues that may help
explain the disappearance of the Clovis people.
By Melinda Waldrop

Approximately 12,800 years ago the distinctive spearpoints and stone blades crafted by early Paleoindian hunter-gatherers, known as Clovis, disappeared. Around this same time, more than 35 species of ice-age animals, including the mastodon, mammoth and saber-toothed tiger, went extinct. The exact reason for the extinction event has never been pinpointed, but a prevailing theory has been bolstered by a recent discovery made by a research team including three University of South Carolina archaeologists.

A 13-member team, including USC archaeologists Christopher Moore, Albert Goodyear and Mark Brooks, found an abundance of platinum in soil layers at 11 archaeological sites in North and South Carolina, Arizona, California, New Mexico and Ohio. The presence of the platinum points to a cosmic event, such as a comet or asteroid, that might have set off the Younger-Dryas, a period of extreme cooling that began around 12,800 years ago and lasted about 1,400 years.

Platinum is rare in the Earth’s crust, but common in asteroids and comets. Moore says its prevalence is consistent with a hypothesis of an extraterrestrial impact. While some species that disappeared were on the decline before the Younger-Dryas, virtually none are found after it, he says, strengthening the case for an extinction event. The authors of this study note, however, that further research is needed to establish whether an extraterrestrial impact, human overhunting, chang--ing climate conditions or some combination of all three are responsible for these extinctions. The team’s findings are outlined in a March study in Scientific Reports, an online publication of Nature.

Though similar, the dinosaur extinction was the result of a very large impact from an asteroid, Moore says. The Younger-Dryas likely began after the Earth absorbed hits from fragments of a much smaller comet or asteroid, perhaps up to two-thirds of a mile in diameter. Scientists are still trying to identify a known impact crater for the Younger-Dryas event.

Exotic as it sounds, an extraterrestrial extinction event is not unprecedented in the Earth’s history The platinum anomaly is reminiscent of the well-documented finding of iridium, another element common in cosmic objects, abundant in rock layers from 65 million years ago. That impact, known by scientists as the Cretaceous-Tertiary or K-Pg, caused the extinction of dinosaurs. 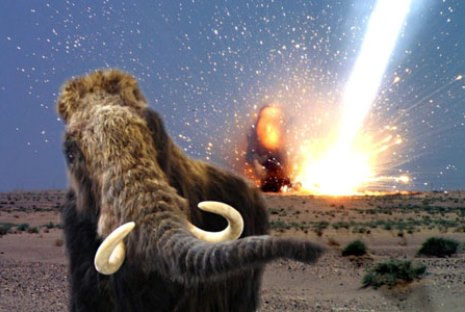 Read more about this project.