Dark Side of the Sun

Columbia will be a prime viewing spot for an historic transcontinental solar eclipse in August, and USC is gearing up for the event.

A shadow 60 miles wide and zooming 1,000 miles-per-hour is headed for the United States — and the University of South Carolina is ready to welcome it.

You could say it is among the most extraordinary natural events that anyone will experience in their lifetime.

The eclipse is a big deal for Columbia, S.C., already dubbed the Total Eclipse Capital of the East Coast, because the city is in the middle of its path and the last major metropolis before the eclipse’s shadow goes out to sea. If the forecast is clear, South Carolina could see an enormous influx of visitors eager to experience the event, and that’s where the university comes in.

“We’ll set up several eclipse viewing stations across campus on the day of the eclipse to accommodate the campus community and visitors,” says Steven Rodney, an assistant professor in the Department of Physics and Astronomy.

In addition, there will be an exhibit from the Irvin Department of Rare Books and Special Collections at Thomas Cooper Library, and a faculty member from the geography department will be conducting an atmospheric experiment with weather balloons during the eclipse.

There are also plans to have a large viewing screen set up, perhaps in the Russell House, to show live video of the eclipse as it makes its way from Oregon to South Carolina. That will also provide an alternative viewing site in case of clouds or rainy weather in Columbia.

If you plan to watch the eclipse with your own eyes, get a pair of eclipse viewing glasses, Rodney says. They’re a must-have item because regular sunglasses can’t provide enough filtration to protect eyes from the sun. Campus viewing sites will have a limited number of the special glasses.

The darkest sequence of the eclipse, called the time of totality when the sun is completely blocked by the moon, won’t last long — only two minutes and 29 seconds on USC’s campus — and it will begin in Columbia at 2:41 p.m. with about 90 minutes of partial darkness both before and after. When considered only in minutes and seconds, the eclipse might not sound like a big deal — but that’s definitely the wrong conclusion, Rodney says.

“You could say it is among the most extraordinary natural events that anyone will experience in their lifetime,” he says. “Don’t miss it!”

And those brief moments of sun-less day on Aug. 21 aren’t all that will be happening on campus related to the eclipse.

Man on the Moon

Records of solar eclipses date back to 700 B.C. from the Assyrian and Chinese cultures, and Herodotus is often cited as the source for many eclipses from the classical period. But those ancient people’s understanding of the phenomenon was understandably incomplete, says Michael Weisenburg, a reference and instruction librarian in USC’s Irvin Department of Rare Books and Special Collections.

“The early Chinese word for eclipse meant ‘to eat’ or ‘to swallow,’” he says. “The idea was that a supernatural being was swallowing the moon or the sun [during an eclipse], and it was considered a bad omen. Vietnamese folklore spoke of a frog that ate the sun. Of course, there was no empirical way to explain how an eclipse was happening back then.”

The Irvin Department plans to mount an exhibit of several rare books dating back to the 16th century that provide some of the earliest printed scientific explanations of solar eclipses. Most of the books will come from the Robert B. Ariail Collection of Historical Astronomy.

The Venerable Saint Bede, an ecclesiastical historian, presented the pre-Copernican philosophy of the day when he described the sun, moon and other planets and stars rotating around the Earth, then considered the center of the universe. A woodcut illustration from a book published on Bede’s writings in the 17th century depicts a rudimentary understanding of an eclipse with the sun’s rays blocked by the moon.

“By the 1600s, they weren’t saying a frog ate the sun; they were trying to be scientific,” Weisenburg says. “From a cultural perspective, the book’s production was created by printers who would often insert biblically themed illustrations. So you have these woodcuts that have the sun and moon personified with human faces.”

Also on display will be “Theoricae Novae Planetarum,” a book published in 1537 and written by Georg von Peuerbach, an Austrian mathematician and astronomer. Von Peuerbach’s text was the standard astronomical textbook of its day but was abandoned after Copernicus’ theories of the sun being the center of the universe became more widely accepted.

“The church saw Copernicus’ ideas as a threat because of hundreds of years of canonical thought that had stated the earth as the center universe,” Weisenburg says. “They were probably thinking, ‘If we’re wrong about this, what else in our doctrine will people think we got wrong.’”

The exhibit will also include De la Sfera del Mondo, the first printed star atlas written by the Italian philosopher Alessandro Piccolomini and published in 1540. The book includes woodcut illustrations of constellations in the visible universe — stars that can be seen without a telescope.

Other books on display will include 19th century amateur science volumes that served as popular guides to making astronomical observations.

Up, Up and Away

While the eclipse is taking place Aug. 21, April Hiscox and a team of students will be busy launching atmospheric data-collecting balloons.

The balloon launches will tie into her research of the near-surface atmosphere — the layer that extends from earth’s surface to about a half-mile high. Hiscox’s team will be joined by 11 other universities from coast to coast, conducting a coordinated atmospheric survey during the eclipse.

“If it’s a sunny day, I think we’ll see small changes in temperature, wind direction shift and, hopefully, a wave event that occurs when there’s an oscillation of air trying to regain its buoyancy,” she says. “That wave can drive turbulence — enough to affect a small plane flying a mile high, but not violently.”

The helium-filled balloons, four to five feet in diameter, carry a small payload of sensors that measure solar radiation, temperature, wind speed and direction. “From an experimental standpoint, we have one shot,” Hiscox says. “So if it’s overcast that day, it will probably affect the data we get. We might launch several balloons in succession during the time of totality to get a fuller picture of what’s occurring.”

One of Hiscox’s master’s students will use the data for a thesis project, and members of the undergraduate geography club will help launch the balloons, which will rise 8-10 kilometers before collapsing and returning to earth by a small parachute. 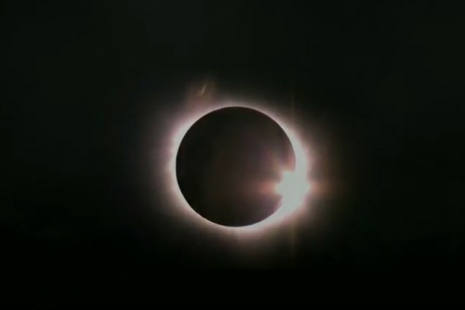 At 2:41 p.m. on Aug. 21, the Columbia, SC area enjoyed a front-row seat to history with a 100 percent total eclipse viewing period of two minutes and 36 seconds. While partial eclipses are more common, August's total solar eclipse was a remarkable and rare event. Read more about the 2017 eclipse at USC.