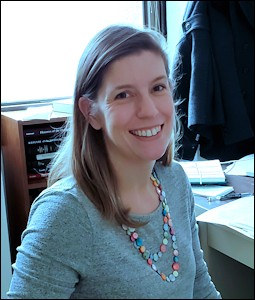 I specialize in twentieth- and twenty-first-century English-language African and Caribbean literature, postcolonial theory, critical human rights studies, and critical university studies. My first book, Literature, Law, and Rhetorical Performance in the Anticolonial Atlantic (The Ohio State University Press 2016), uncovers a longstanding dynamic literary history of African and Caribbean critical engagements with First World law, dating back to the 1804 Haitian Declaration of Independence and manifesting much later in some of postcolonial literature’s most canonical titles. I argue that experimentation with declarative forms is a vital rhetorical strategy in the anticolonial Atlantic—one through which writers have asked, and sought new answers to, the question: who gets to “write” the law, and under what circumstances? Drawing on the cosmopolitan aspirations and emancipatory energies of the political declaration, this generically and geographically diverse archive works to radically re-invent the possibilities for law and political belonging in the postcolonial future.

My current book project explores how the African university has been imagined and theorized in African letters from the early twentieth century up through the present, and propose that this history has much to contribute to contemporary global debates about the plight of higher education in an era of neoliberalism. Anglophone African literature’s engagement with the idea of the university dates back to 1911, when J.E. Casely Hayford made the university the cornerstone of his ambitious, transnational vision of a decolonial Africa of the future. Just over a hundred years after the publication of Ethiopia Unbound, student protesters forced the removal of the statue of Cecil Rhodes from the center of the University of Cape Town’s campus, sparking a nationwide series of student movements aimed at addressing both the material and intellectual legacies of colonialism and apartheid in higher education. While #RhodesMustFall lays bare the distance between Hayford’s early-twentieth-century vision and the reality of higher education in the postcolony, it also serves as proof that the idea of the African university as a site of radical political, intellectual, and social transformation remains alive and well. These touchstones in the long twentieth- and twenty-first-century history of the African university ground my research, which also engages contemporary transnational debates about the plight of the neoliberal university—debates that tend to center exclusively around institutions located in the U.S. and Western Europe. Drawing on Jean and John Comaroff’s assertion that “in the present moment it [may be] the global south that affords privileged insight into the workings of the world at large,” I propose that it is time to attend to Africa as the place from which a theory of the twenty-first-century university might emerge, rather than a place onto which such a pre-existing theory might merely be applied.

In another, more nascent research project I am exploring how African women writers of the twentieth and twenty-first centuries deploy the trilogy form as well as multigenerational narratives in order to probe and challenge the way we periodize anti- and postcolonial history. In a forthcoming article in Research in African Literatures I read Tsitsi Dangarembga’s The Book of Not—the 2006 sequel to her 1988 Nervous Conditions—as an uncomfortably untimely novel of decolonization, a twentieth-century novel written in the twenty-first-century whose temporal disjointedness invites us to interrogate the norms of reading and writing Africa’s anticolonial past in our postcolonial, neoliberal present. An article in progress explores how the multigenerational narrative structure of Aminatta Forna’s Ancestor Stones historicizes the postcolonial state in ways that refute rigid periodizations of the colonial and anticolonial past that identify independence as a definitive rupture point. Drawing on Susan Andrade’s insights about the often subterranean radicalism of African women’s fiction, I argue that Forna’s novel—the first in what is now a trilogy—illuminates matrilineal and matrihistorical lines of connectivity across generational divides, complicating and deepening an emergent historical narrative about the purchase of anticolonialism in the twenty-first century.

The era of national liberation and decolonization may have come and gone, but postcolonialism remains a largely elusive ideal in the early twenty-first century.  Literature, Law, and Rhetorical Performance in the Anticolonial Atlantic uncovers a dynamic literary history of African and Caribbean critical engagements with First World law that attests to the continuing vitality of anticolonialism as a model for intellectual inquiry and political performance.  Anne Gulick argues that experimentation with declarative forms is a vital rhetorical strategy in the anticolonial Atlantic—one through which writers have asked, and sought new answers to, the question: who gets to “write” the law, and under what circumstances? These responses take shape in a generically and geographically diverse group of texts, from Haiti’s Declaration of Independence to Aimé Césaire’s surrealist poem of negritude to Ngugi wa Thiong’o’s novel of decolonization.  They constitute a robust transatlantic tradition of challenging colonial and imperial authority through rhetorical performance.  Drawing on the cosmopolitan aspirations and emancipatory energies of the political declaration, this tradition aims to radically re-invent the possibilities for law and political belonging in the postcolonial future.