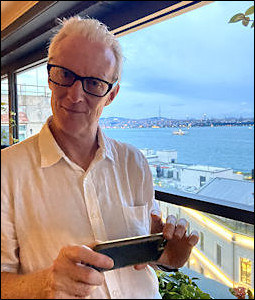 I’m working on a book called “Time and World in Global Anglophone Literature” that asks two large questions: what is the concept of “world” implicit in the idea of “global Anglophone literature”? And how do works in this body of literature link “world” not just to space—to such literature’s “reach” across the globe, for example—but to particular ways of inhabiting time?

The first question opens onto a range of recent debates surrounding capitalist globalization. It allows me to explore what literature has to teach us about the variety of local “worlds” produced by globalization, the different conceptions of globalism embedded in the terms “postcolonial” and “global Anglophone,” and the question of English as an increasingly potent lingua franca that mediates and legitimates the production, circulation, and consumption of literature around the world. Here my aim is synthetic and polemical. I attempt to grasp the limits of current discussions of Anglophone literature that treat it as either a form of cultural imperialism or the benign corollary in the domain of culture to political processes of global integration.

My intuition about the second question is that it provides a unique vantage point for imagining alternatives to capitalist globalization. That is, to ask how global Anglophone literature views the world as a temporal rather than a merely spatial phenomenon is to reveal how these works think of time as multiple rather than singular. They depict the present world as haunted by pasts that contain both the hidden history of contemporary power dynamics and the residue of unrealized possibilities for more just and equitable social relations. In this way, my book explores how literature retrieves from our damaged present the memory of pasts that open onto a radically transfigured, egalitarian future.

BOOKS
• Critique and Utopia in Postcolonial Historical Fiction: Atlantic and Other Worlds (Oxford UP, 2019)
• Gender, Race, and Mourning in American Modernism (Cambridge UP, 2011)
• Murdering Masculinities: Fantasies of Gender and Violence in the American Crime Novel (New York UP, 2000)