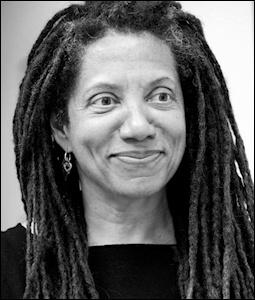 Nikky Finney was born in Conway, South Carolina and raised in Sumter. She left South Carolina after high school with her eyes and heart set on becoming a writer. After living and studying primarily in the south, Talladega College in Alabama and Atlanta University in Georgia, she moved to Oakland, California for several years but was invited in the early 1990’s to teach at the University of Kentucky. For 21 years she taught poetry and fiction in Lexington. In 2013 she became Professor Emeritus at the University of Kentucky and accepted the John H. Bennett, Jr. Chair in Creative Writing and Southern Letters at the University of South Carolina. She has a joint appointment in the department of English Language and Literature and the African American Studies program. African American history, the history of America, as well as topics in Popular Culture, Gender and Sexuality, Art, Race and Social Justice are at the core of her work. Finney has authored five books: On Wings Made of Gauze (1985), RICE (1995), The World Is Round (2003) and Head Off & Split (2011), which was awarded the 2011 National Book Award for Poetry. She also authored Heartwood (1997), a book of short prose, and edited The Ringing Ear: Black Poets Lean South (2007), an anthology of African American poets writing about their southern connections. Writing is Nikky Finney’s port-of-call but poetry her first language.