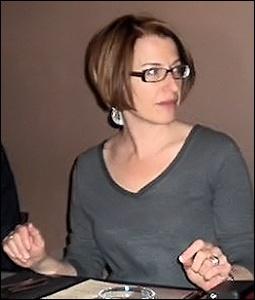 I spent many years as a journalist and critic before returning to academe, and much of my current work is concerned with the conversations and intersections between Modernist literature and the mass media of the period. My co-edited collection, Broadcasting Modernism, examines the centrality of radio to Modernist literary culture. I am now at work on "Sonic Citizenship: Intermedial Poetics and the BBC," which extends the work of Broadcasting Modernism to explore the relations between the BBC and interwar print cultures. Other projects include a pedagogical volume on the teaching of World War I literature, a short volume on Modernism and Media, and a series of pieces on Rebecca West, focusing on her significance as a limit case for modernist historiography.

ARTICLES
• “‘Police and Thieves’: Citation as Struggle in the Punk Cover Song.” (With Michael Coyle.) Social Text 116 (2013): 111-22.
• “Sound Bites: Vampire Media in Orson Welles’s Dracula.” Sounding Out! 2 September 2013.
• “Getting the Frame into the Picture: Wells, West, and the Mid-War Novel.” The Space Between 8:1 (2012): 85-107.
• “Intermediality and the Problem of the Listener.” Modernism/modernity 19.3 (2012): 569-92.
• "Modernism on the Radio." A Handbook of Modernisms, edited by Peter Brooker, Andrzej Gasiorek, Deborah Parsons and Andrew Thacker. Oxford University Press, 2010.
• "Rebecca West's Palimpsestic Praxis: Crafting the Intermodern Voice of Witness." Intermodernism: Literary Culture in Mid-Twentieth-Century Britain, edited by Kristin Bluemel, Edinburch University Press, 2009.