Shortly after opening, the Russell House became known as USC's "Grand Central Station" and is commonly referred to as the most important building on campus.

U.S. Circuit Court Judge Donald S. Russell (class of 1925) was president of the University of South Carolina from 1952 until 1957. Russell and his wife Virginia were adored for their sincere interest in the welfare of students, devotion to improvement of the University of South Carolina, and genuine love for Carolina. They created a warm, welcoming atmosphere for students and were well-known for the elaborate, festive dinners held at their residence for incoming freshmen and the entire graduating class.

During his presidency, Judge Russell was instrumental in ensuring the passage of legislation which allowed state institutions of higher education to issue tuition and dormitory revenue bonds to finance permanent improvements.

Where We Are Growing

A number of new buildings were made possible during President Russell’s tenure, including the student union building. Construction of the first phase of the student union building (originally called the Carolina Student House) was completed in 1954. At the insistence of students, the building was renamed in honor of Donald S. and Virginia Russell. On October 16, 1955, over 2,500 alumni, students and distinguished visitors gathered to witness the dedication of the Carolina Student House to Donald and Virginia Russell.

Since that time, the Russell House University Union (RHUU) has undergone three major additions. In 1958, the 2nd floor over the Grand Market Place (food court) was added to the original building. The West Wing, which houses various offices representing the Department of Student Life was added in 1967. The area east of the theater, including the ballrooms, meeting rooms and lounges was added in 1976. Since that time, several interior up fit projects have taken place to continue meeting the diverse needs of the growing student population. 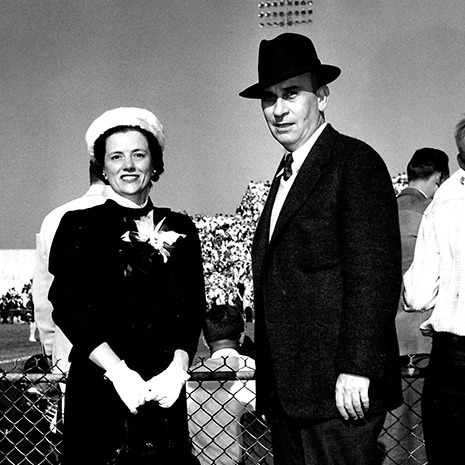 The Russell House University Union was named in honor of Donald S. and Virginia Russell in 1955.