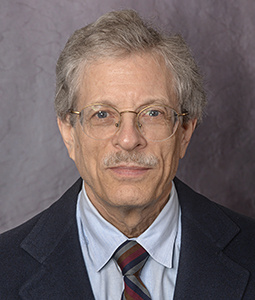 Rosenfeld is an experimental particle physicist.  He has emphasized work on electron-positron colliding beam experiments and experiments on the properties of neutrinos.  All such experiments are carried out by multi-institutional collaborations.  His major contributions have been in the design, production, and commissioning of detector hardware and electronics utilized in these projects.  He participated in CLEO (www.classe.cornell.edu/Research/CLEO/), an electron-positron colliding beam experiment based at Cornell University, and in AMY (en.wikipedia.org/wiki/AMY_(scientific_instrument)), another electron-positron colliding beam experiment, based at the Japanese National Laboratory for High Energy Physics (KEK).  CLEO played a major role in the investigation of b-quark physics.  Subsequent to those projects Rosenfeld contributed to two Fermilab based experiments on the properties of neutrinos.  The DONUT experiment (www-donut.fnal.gov) was the first to observe the conversion of a tau-flavored neutrino to a tau lepton.  The MINOS experiment (www-numi.fnal.gov) was among the first generation of experiments to observe the oscillation of accelerator produced mu-flavored neutrinos by virtue of their disappearance over a long baseline (735 km).  In due course the experiment observed the reappearance of these particles as electron-flavored neutrinos.  In parallel with MINOS Rosenfeld participated in the CUORICINO experiment (crio.mib.infn.it/wig/Cuoricinopage/CUORICINO.php) based at the deep underground facility of the Laboratori Nazionali del Gran Sasso in central Italy.  CUORICINO was an array of 62 tellurium oxide crystals (5 cm cubes) operated at 10 mK in which the neutrinoless double-beta decay of one isotope of tellurium, if it occurred with sufficient frequency, would have been observable by its bolometric signature.  Observation of neutrinoless double-beta decay would be highly instructive vis-a-vis the masses and Majorana character of the constellation of neutrinos.  Rosenfeld also participated in CUORE-0, the first successor to CUORICINO, and presently participates in CUORE (crio.mib.infn.it/wigmi/pages/cuore.php), which expanded the number of crystals under observation to 988.

A list of selected publications co-authored by Rosenfeld is appended to his curriculum vitae.