Cellphone Use for Classroom Teaching and Presentations

While there are many online articles, videos, and instruction on installing Office 365 on computers and mobile devices, the following information more specifically addresses the process from the standpoint of the resources available to faculty, staff, and students at the University of South Carolina.  Additionally, considering the necessity to use technology in the teaching process, information on how to use cellphones in classroom instruction and presentations to connect to overhead projectors is discussed.

The following steps involve the installing of Office 365 onto your devices as USC faculty, staff, or students.

OneDrive is a FREE cloud storage service app offered to USC faculty, staff, and students. In addition to OneDrive being able to run on most of your cellphone, tablet, or computer devices (Mac and PC) the default amount of storage space is 5 TB. Yes, that’s five terabytes.  To somewhat muddy the Onedrive waters, there is a Onedrive app and a Onedrive for Business app.  Here is a link that should shed some differences between the two you will want to be aware of as USC faculty, staff, or students.  Here is also a link of Onedrive help videos.

There are several ways to access and open your digital file content on your cellphone, tablet, laptop, or desktop. Accessing OneDrive is the best and most efficient that is FREE.  Accessing your files on OneDrive can also be accomplished by going to Office365.com and signing in to Workplace or School if that is an option.  After you sign in, most of the Office 365 online apps are available to run from a web browser including Onedrive.  I found this method the preferable way to access my files in the cloud on Onedrive instead of using the Onedrive apps on my computer.

While you can save the digital files you work on onto your own computer, you will also want to save it to the cloud onto OneDrive.  Doing this gives you access to those files from other devices at any time.  A good example is you have a Powerpoint file you are working on and want to present it in class.  Saving it to OneDrive would allow you to easily access this file after running Powerpoint from your cellphone, tablet, or laptop to open and play it.  The one caveat about this example is if you want to use your cellphone to hook up to the classroom projector, you will need an adapter for your cellphone to hook up to the video cable on the podium.  See "Which Cellphone Adapter Do I Need?" below.

The use of OneDrive is not mandatory for university students, faculty, or staff but is a recommended solution that has been vetted and security hardened for the protection of university data.

(This list will grow as features are found out)

Regardless of whether you get a video adapter for an iPhone or Android cellphone, do yourself a huge favor and make sure the adapter has a port to add an external power source or an external battery. You will not want your cellphone to die during your presentation.  See the example pictures below of HDMI video adapters.

An adapter that works with your cellphone that has a port for standard USB is also an option for Android devices.  There are special USB drives for both iPhones and Android devices that plug straight into the charging port.  In addition, there are HDMI video adapters for Androids that include a standard USB port that you can plug USB devices into.  Bluetooth keyboards work on iPhones and the Android operating system... just not a pointing device with an iPhone such as a mouse.  A mouse of any kind does not work with iPhones. Using a Bluetooth mouse on your Android cellphone or tablet gives you the typical mouse arrow cursor to navigate your cellphone.

If you are wanting to use your cellphone to connect to the classroom projector, that’s a difficult question to give a single simple answer.  There are two parts to that answer… the model of the cellphone and the video cable present on top of the podium in the classroom.

First and foremost, your cellphone may not have the ability to show video on a TV even with an adapter. 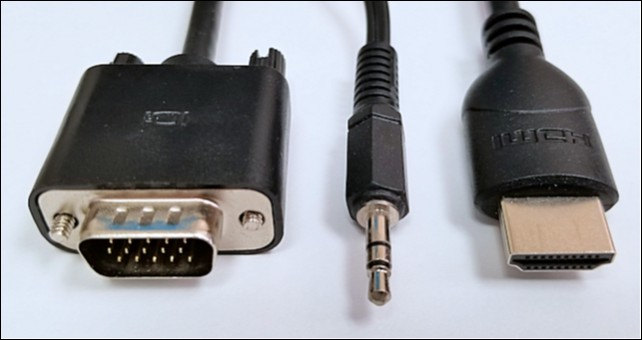 VGA will be the more common (oldest technology) and most likely connector on most of the classroom podiums on the USC campus.  However HDMI is the newer specification and listed as highly likely to be on the podium.  The specification of the VGA cable does not include passing an audio signal between the two devices connected by a VGA video cable.  An HDMI video cable does pass audio through the cable making it unnecessary to use the 1/8” audio cable if playing audio is desired.  Also considering that Apple has removed the 1/8” headphone port from its newer iPhones, using the HDMI video cable to hook up to projectors will be preferable making the VGA video cable a second choice. Additionally, using a VGA video adapter with the newer iPhones would require additional adapters to support audio through the speakers in the classroom.  Bottom line… using the HDMI video cable on the podium and an HDMI video adapter is probably going to end up being the better choice for connecting mobile devices to the classroom projector.

1. USB Type A connectors are typically used on the ends of flash drives that plugs into computers. The female version of this connector type is usually on the computer or device you are trying to connect to.

2. Apple Lightning connectors are on most iPhones. Some newer Apple iPhones, laptops, and tablets have started using USB Type C connectors (number 4 above).

3. Micro USB connectors are on most but not all Android phones that are older than 3 years.

4. USB Type C connector has been recently adopted for use on newer Android phones as well as on newer Macintosh laptops and tablets. It also goes by the name of the “Thunderbolt 3” connector with reference to Macintosh devices.

There is no way of knowing for sure if there will ultimately be a standard, but there is a movement to make USB Type C the common connection standard for devices interfacing with cellphones, tablets, and computers.

Usually the lightning charging port on the right is used to hook your charging power adapter or an external battery to so your phone doesn’t die during your presentation.  In this case, an external power source connected to the adapter is not mandatory but may prove useful at some point.  The types and features of video adapters are too numerous to cover.  One thing you could do is go to a store that sells video adapters and ask to see if they would hook the adapter from your cellphone up to a TV/computer monitor to see if it works.  Example setup below… 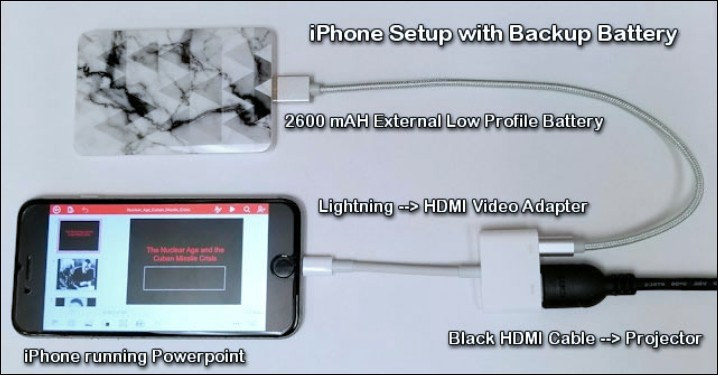 This HDMI video/USB adapter is one that has been tested and used on a Samsung Galaxy Note 9 cellphone. The USB-C charging port is where you would plug in an external battery or hook up your cellphone charger to.  This would ensure that your cellphone battery would not die during your presentation.  The USB-A port has proved to be very useful as this adds another way to easily get files onto a cellphone by using a USB flash drive.  Another cool feature is to use a wireless mouse with your cellphone by plugging the wireless mouse USB transmitter/receiver into the USB-A port.  A cursor then appears on the screen of your cellphone to use and click on icons just as you would a computer.  Setting up a bluetooth mouse and keyboard also works with most if not all Android cellphones and tablets.

BEFORE Hooking Up Your Cellphone to the Classroom Projector

Content related to using your cellphone for teaching in the classroom will be tweaked and updated as new information becomes known and proves useful.