DISCOVER UofSC, Sponsored by the Office of Research

Born in Oku, a tiny fishing village on Shikoku, the smallest of Japan’s four main islands, Shuji learned from his father, Tomokichi, how to make things like catapults and bamboo propellers by hand, a skill that would serve him well throughout his career. Shuji was not an outstanding student, but he showed great talents for math and science. He majored in electrical engineering at Tokushima University, a local state school, where he attended the lecture on semiconductors that would ignite his lifelong fascination with the physics of solid-state materials and inspire him to pursue a master’s degree.

Though Nakamura was drawn to focus on theory, his mentor, Osamu Tada, pushed him toward hands-on experimentation, which in their lab, entailed breaking down “junk” like old TVs, harvesting parts, and building new equipment for experiments. Though he didn’t know it at the time, this experience would prove invaluable and set the stage for Shuji’s career, which would draw heavily on these skills.

After completing his master’s degree in 1979, Nakamura joined a small chemical company, Nichia, on his home island of Shikoku. At Nichia, he carved out a position for himself as a developer of new products, ultimately earning the confidence and financial backing necessary to pursue the audacious goal that would, years later, win him a Nobel Prize: develop the world’s first bright blue light-emitting diode (LED). He set out on the path to the blue LED at the University of Florida, where his role as a guest research associate again positioned him as the lab’s de facto builder, constructing a metal-organic chemical vapor deposition system. Though this was not his intended role, it turned out to be excellent preparation for the building and modification he would do in his own Nichia lab after returning to Japan in 1989.

Over the following years, Nakamura planned his path forward, selecting gallium nitride as the base material for his work, building his lab, and setting out in pursuit of his lofty goal. For years, Dr. Nakamura worked, first re-tooling his equipment, then refining processes, spending hours each day working according to his preferred method: “remodel in the morning, experiment in the afternoon.” Over time, his diligence paid off at first in stepwise breakthroughs, and finally, in 1993, in the achievement of his ultimate goal, the world’s first bright blue LED.

Shuji Nakamura’s success in creating the bright blue LED has resulted in a domino effect, enabling him to earn a Ph.D. based on his related publications, garnering an immediate flood of orders for the new product from the Nichia company, allowing for the development of efficient white LED lighting that today is illuminating the world and leading to the development of blue lasers.

This bio has been condensed from Nakamura’s extended biography available at NobelPrize.org. 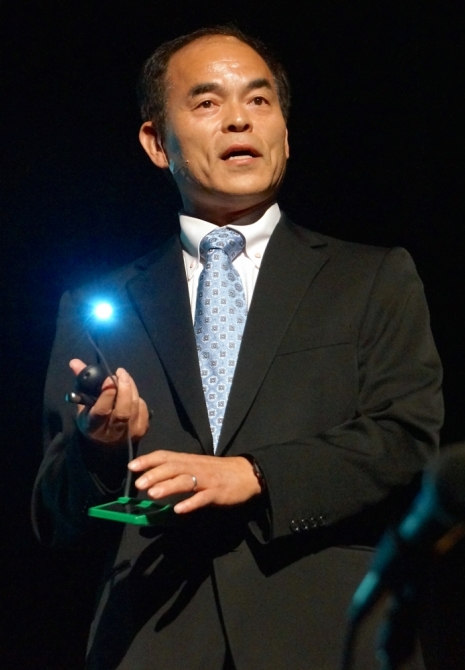