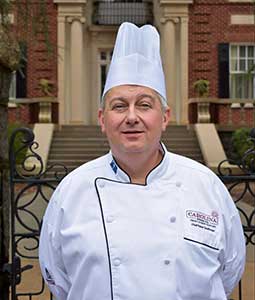 Chef Peter likes to boast that he “proudly hails from the Kingdom of Bavaria," otherwise known as the southern part of Germany. He began his culinary career as an 8-year old helping out his brother and sister in their local Gasthauses. After obtaining his culinary degree, Chef Peter spent over four years in the German Army. He then set his sights on joining a cruise line and was offered his first contract on the Royal Viking Line. After eight years with the Royal Viking Line, he accepted a Sous Chef position in Grand Cayman at The Wharf and moving on to work for Crystal Cruises as Chef de Cuisine for the next 10 years. In 2008, after the birth of his daughter, Chef Peter decided to work for the hotel industry landing his first job in the U.S. as the Senior Executive Sous Chef for Gaylord National. In July of 2016, Peter proudly accepted the Executive Chef III position at the University of South Carolina where he oversees all Presidential Catering Events.

What is your favorite memory associated with food?

My mother cooking "Armar Ritter" (translates in English to "Poor Knight") back in Germany when I was a kid. We were a Catholic family and had meatless Fridays. This dish was a favorite of mine because it was a French toast style casserole with vanilla ice cream on top. This was a main course for lunch which tasted more like a dessert and I still think about it to this day.

What advice do you have for anyone learning to cook for themselves?

Always use fresh ingredients and focus on the simplicity of the food. Keep the main thing, the main thing. You may also want to keep the band aids handy.

What is a fun fact the students should know about you?

Growing up in Germany, I played the trumpet and was part of an 80 member Oom-Pah Pa band, complete with Bavarian Lederhosen!