Founded in 1801, then-South Carolina College flourished pre-Civil War, overcame postwar struggles, was rechartered in 1906 as a university and transformed itself as a national institution in the 20th and 21st centuries.

The Palmetto State established South Carolina College — the University of South Carolina's precursor — on Dec. 19, 1801, as part of an effort to unite South Carolinians in the wake of the American Revolution. The state's leaders saw the new college as a way to promote "the good order and harmony" of the state. It was also a part of the Southern public college movement spurred by Thomas Jefferson.

The campus grew around the Horseshoe's quadrangle. In 1805, the first building — Rutledge — was completed. For a time, Rutledge served as classroom, lab, library, chapel, and student and faculty housing until DeSaussure was completed in 1809.

In 1855, a fire gutted Rutledge and five years later South Carolina's secession from the Union unleashed the devastation of war. Without students, the college closed in 1861 and, in ensuing decades, struggled to regain its former status.

Richard T. Greener, the university's first African-American professor, taught during the Reconstruction Era, from 1873 through 1877. Learn more about his accomplishments and the campus monument placed in his honor next to Thomas Cooper Library or on the Remembering the Days podcast.

In 1893 the state legislature mandated that women be allowed to enroll. The first female student — Frances Guignard Gibbes — was admitted on September 24, 1895. The university's first female graduate was Mattie Jean Adams, who was awarded a bachelor of arts degree in 1898. While women were allowed to attend, they were not yet permitted to live on campus and had to live with family members. The first Garnet and Black yearbook was published in 1899.

In the early decades of the 20th century, South Carolina made strides toward becoming a comprehensive university. In 1917 it became the first state-supported college or university in South Carolina to earn regional accreditation. The Great Depression temporarily stalled progress, but the outbreak of World War II brought U.S. Navy training programs to campus. Enrollment more than doubled in the post war era as veterans took advantage of the G.I. Bill. In the 1920s, women reached 25 percent of the student population.

During the war years, female students were allowed to live in traditionally male dormitories. As male students began to return to campus, the university built the first residence hall for female students on campus, later named Wade Hampton College.

The first brick of the Horeshoe pathways was laid on Nov. 23, 1931. The president of the university at the time, Leonard Baker, ceremoniously placed the brick and the last ones were laid by the end of the fall semester. Learn more about this Great Depression-era project on the Remembering the Days podcast.

In the 1950s, the university extended its presence beyond Columbia with the establishment of campuses in communities across South Carolina. In the 1960s, the university began to focus on research, recruiting national-caliber faculty, and adding new schools and colleges.

For several decades in the 20th century, African Americans had applied for admittance to the university and were denied because of statewide segregationist sentiments. On Sept. 11, 1963, Henrie D. Monteith, Robert Anderson and James Solomon became the first African-American students to enroll at the university in the 20th century. In 1965, Monteith became the first African-American graduate, earning a B.S. in biochemistry.

The university experienced explosive growth as the baby boom generation entered college. Enrollment stood at 5,660 in 1960, but by 1979 had reached nearly 26,000 students on the Columbia campus alone. During the era, the university put new emphasis on research, and introduced innovative degree programs as well as a number of new schools and colleges. The original campus, which contains the Horseshoe, was included in the National Register of Historic Places in 1970.

The state's first school of public health — later named the Arnold School of Public Health — opens on campus in 1975. A renovation program that began in 1972 restored the 19th-century Horseshoe buildings and created a home for the South Carolina Honors College, which was established in 1977. Thomas Cooper Library was built in 1976.

In the 1980s, the university reached a new milestone — women comprised 50 percent of the student population. Beginning in 1981, female students outnumbered male students at South Carolina for the first time. To date, the trend has never reversed. Learn more about the experience of women on campus on the Remembering the Days podcast.

In 2001, the University of South Carolina observed its bicentennial celebration.

The university's first LEED-certified building, the Green Quad opened. A sustainable living-learning community, the Green Quad includes three residences and a Living/Learning Center in the heart of the quadrangle.

The university's online Palmetto College was founded for students seeking to complete bachelor’s or graduate degree programs through the system’s four degree-granting campuses.

On December 5, 2017, two plaques were dedicated on the Horseshoe honoring enslaved men and women who helped build or worked at South Carolina College before the Civil War. The first, located near the President's House, identifies the last remaining kitchen and slave quarters on campus while the other, near the top of the Horseshoe, recognizes the invaluable contributions of enslaved workers from making materials and building construction to daily campus life. Learn more about the experience of one enslaved worker named Jack on the Remembering the Days podcast.

University of South Carolina Alumni Association established the college's first LGBTQ+ Alumni Affinity Group. The first floor of the Byrnes Building became the Veterans and Military Center of Excellence, a dedicated area for military-affiliated faculty and students to gather and access campus services.

Circa 1870Around 2018, a Horseshoe live oak tree was struck by lightning and had to be removed. The grounds crew counted 154 tree rings, dating its planting to about 1870, just after the Civil War. The salvaged wood was repurposed into a massive dining table for Community Table. 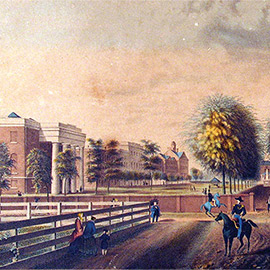 From the architectural design and influence of Robert Mills, the nation's first federal architect and the designer of the Washington Monument, to the South Caroliniana Library as the first freestanding college library building in the nation to the monument honoring the enslaved men and women who helped build or worked at South Carolina College before the U.S. Civil War, every brick and inscription on the original Horseshoe campus shares a chapter of our eventful history.