The Office of Undergraduate Admissions manages online applications to the university and provides the most comprehensive information on the application process. The admissions office also provides the latest information on application deadlines and university scholarships for S.C. residents and nonresidents. So whether you are applying as a freshman, are looking to transfer to South Carolina or are planning to come to Columbia from another UofSC campus, you can check the requirements based on your current status and apply now.

We encourage you to explore funding opportunities that give preference to African American Studies majors and minors.

Purpose
The Grace McFadden Award recognizes excellence and advancement in African American studies' scholarship; encourages and promotes the study of diverse aspects of African American culture, life and history, and provides financial scholarships to students who pursue this course study.

Award criteria
Students must be in their third year of study. African American Studies majors or students minoring in the program will be given first consideration for the award.

Two awards will be given on the basis of academic excellence and scholarly growth. Recipients must have received a grade of 3.5 or higher in at least two courses in African American Studies.

Awards will be presented at the Robert Smalls Lecture during the fall semester.

Grace Jordan McFadden was a university pioneer as the first African American woman hired in the College of Humanities and Social Sciences, and to receive tenure in that college.

Her service to the university is legendary. In 1986, she founded the Oral History and Cultural Project, making USC an important repository of information on the Civil Rights Movement in South Carolina. Her 25-part videotaped series, "The Quest for Human Rights: Oral History of Black South Carolinians," aired statewide on SCETV, and today is considered the premier model for oral history presentations.

In 1988, McFadden accepted another important challenge as director of the university's African American Studies Program. Under her leadership, major symposia and conferences were held at the university. Also active in the Columbia community, McFadden served as lead historian for the AT&T African American History Calendar. In 1985, she was a member of the group who initiated Historic Columbia's Annual Jubilee Festival of Heritage.

McFadden excelled as a teacher, and when physical limitations prevented her from teaching in the classroom, she welcomed students into her home and continued to share her love of history.

McFadden received many honors throughout her career, but her most treasured was the 2003 John McFadden Award for Outstanding Service to Youth presented by the Benjamin Elijah Mays Academy for Leadership Development at the University of South Carolina.

During a brief stint as a history graduate student at the University of South Carolina in the early 1960s, Hayes Mizell participated in sit-ins at segregated lunch counters and peaceful demonstrations to fully integrate the university campus. His student activism drew Mizell away from a life in academia and into a position as director of the National Student Association’s Southern Student Human Relations Project. As director of this project, Mizell promoted student activism and civil rights work on various southern college campuses. In 1966, Mizell began a long relationship with the American Friends Service Committee (AFSC), a Quaker organization committed to social justice, then joined the Desegregation Task Force. His initial position was as a program representative monitoring desegregation in South Carolina, and for the next 20 years, Mizell worked with AFSC in various capacities, including continued desegregation monitoring locally and nationally, work on the improvement of public education throughout the state of South Carolina, and advocacy for disadvantaged youth. Based on his many years of public service, the M. Hayes Mizell Papers offer extensive primary materials in the areas of civil rights, school desegregation, educational reform and child advocacy.

Purpose
The purposes of the fund is to provide support for academic research or travel for research; to encourage study of African American history; and to motivate students to a high level of academic work.

Criteria for Award
The award will be based on academic excellence, with weight given to financial need. The recipient must be an undergraduate major or minor in African American Studies or a graduate student in History with an emphasis on African American History. One award will be given out, on a competitive basis, during the spring semester of each year.

Students applying for this award must present a proposal for a research or travel project that can be completed over the summer and must present a report, verbal or written, as designated at the time of the award.

Students may apply for and receive this award in succeeding years. Students who apply for this award may not apply for the Grace Jordan McFadden Fellowship in the same year.

Professor Terrill came to USC in 1966 with a PhD in American History with an emphasis in African History and African Studies. Out of his research interest in the history of the South, he co-authored The American South: A History (1991) which reflects the place of African Americans have had and continue to have at the center of Southern History.

Committed to making history as accessible as possible, Terrill has done extensive, in-depth work with film and television. He has served as a historian for a number of feature and documentary films on the South as well as television series and a television-based course, The American South Comes of Age.

It is to honor this legacy and keep alive Professor Terrill's splendid example of scholarship and service that the Thomas Terrill Scholarship was created.

Affiliate With Us NEW

University of South Carolina African American Studies Program and the Department of English Language and Literature  are seeking an assistant professor of African American Literature and Cultures.
To see a full description of the position,  click here:

Please fill out this PDF form if you are interested in affiliating with the African American Studies Program. There are three types of affiliation.

Affiliate Faculty Member: Full-time employees of the University who teach AFAM core, cross-listed, or “meets with” courses OR are persons whose research and publications are African American-focused AND are willing to provide service to the AFAM Program (i.e. attend affiliate faculty meetings and/or occasionally serve on an ad hoc committees, etc.)

Adjunct Faculty Member: Associates of the AFAM program who are not full-time employees of the University, but who teach AFAM core, cross-listed, or “meets with” courses.

Friend of AFAM: Supporters of the AFAM program who are not are not currently active in AFAM teaching, research, or service, but who wish to be identified with AFAM’s mission.

Review the requirements for admission, see all of our application deadlines and find out all the information you will need before you start your online application. 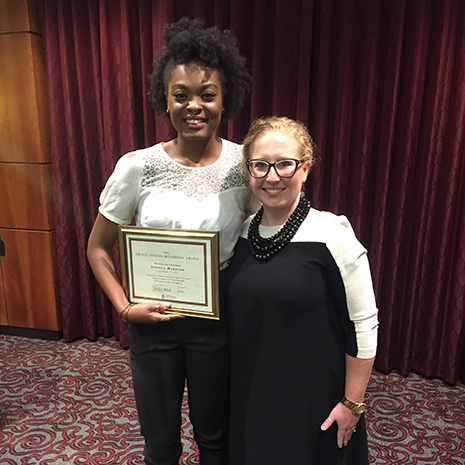 Andreia Wardlaw was one of two students honored with the Grace Jordan McFadden Award in fall 2017. She is a history major pursuing a minor in African American Studies. Wardlaw plans to pursue a doctorate in history.