As a high school student with an aptitude for chemistry and a desire to help people, Stephen Cutler knew pharmacy was the ideal field to study in college. And while USC was on his short list of colleges to attend, the Georgia native opted for an in-state school.

Now, decades later, Cutler will be joining USC as the dean of the College of Pharmacy beginning July 1.

“Through the years one occasionally asks himself ‘what if?’ So it’s really interesting that things have sort of come full circle for me and I’ll be coming to USC not as a college student, but as a faculty member and administrator,” says Cutler, who most recently served as chair of BioMolecular Sciences at the University of Mississippi.

Cutler arrives in Columbia at an important time for the college and the entire pharmacy profession. USC is celebrating its 150th year of pharmacy education and placing increased emphasis on entrepreneurship and the changing role pharmacists play in the health care system.

And while current students will still be a part of the joint USC/MUSC South Carolina College of Pharmacy, USC is nearing the conclusion of its formal re-establishment as a separate pharmacy college. All of which offer unique opportunities for the program to focus on an innovative student curriculum that blends cutting-edge research with an emphasis on comprehensive patient care.

“A half century ago the primary role of pharmacists was to dispense medication,” Cutler says. “Today, these services have expanded to include innovative practices that improve health outcomes including patient counseling, and monitoring patient health, among other roles.  More importantly, pharmacists will serve as the leaders in the changing healthcare landscape through patient-centered care.”

Cutler earned his bachelor’s and doctoral degrees from the University of Georgia before launching his teaching and research career at Ohio Northern University and Atlanta’s Mercer University.

While at the University of Mississippi, he led a $21 million project funded through a National Institutes of Health Center of Biomedical Research Excellence grant. The goal of Cutler’s research is to better understand the medicinal properties found in plants, animals and other natural sources.

At USC, Cutler says he hopes to build on the university’s reputation for attracting top pharmacy students who want to make a difference. “Pharmacy is a wonderful career option and many students choose this career because of the high job placement, competitive salaries, and the opportunity to have a meaningful impact on the quality of life for their patients,” he says.

Joining Cutler in Columbia is his wife, Jill, and 13-year-old daughter. The Cutlers’ two sons will both be attending the U.S. Naval Academy. 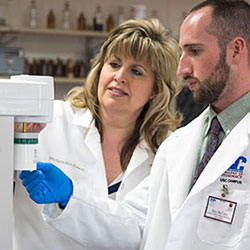 Whether you want to make your mark in clinical care, research or the pharmaceutical industry, we prepare you for a rewarding and well-compensated career on the front lines of healthcare. USC began educating pharmacists 150 years ago, and we boast the largest alumni network in the state.