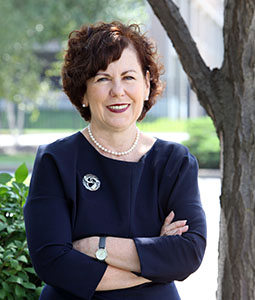 Sarah Gehlert, PhD is Dean of the College of Social Work at the University of South Carolina and University of South Carolina Educational Foundation Distinguished Professor. She also serves as the E. Desmond Lee Professor of Racial and Ethnic Diversity Emerita at Washington University (WU) in St. Louis. Prior to her move, Dr. Gehlert was the Co-Program Leader of the Prevention and Control Program of the Alvin J. Siteman Cancer Center, Co- Director of the Transdisciplinary Center on Energetics and Cancer (TREC), and Training Program Director of the Program for the Elimination of Cancer Disparities (PECaD) at Washington University.

Dr. Gehlert joined the Brown School in 2009 from the University of Chicago where she was the Helen Ross Professor in the School of Social Service Administration (SSA), the Institute for Mind and Biology, and the Department of Comparative Human development. While at the School of Social Service Administration, Dr. Gehlert served as the Deputy Dean for Research. She was the Associate Director of the University of Chicago’s NIH-funded Institute for Translational Medicine (a CTSA) and co-chaired its Community Translation Science Cluster. She was also the Principal Investigator and Director of the university’s NIH-funded Center for Interdisciplinary Health Disparities Research. She directed the university’s Maternal and Child Health Training Program from 1992-1998 (funded by the US Public Health Service) and was Principal Investigator on an NIMH-funded community-based study of rural and urban women’s health and mental health from 1997-2001. She was Co-Principal Investigator and Core Leader of the Health Disparities and Communities Core of the CDC-funded Chicago Center of Excellence in Health Promotion Economic from 2004-2007.

Dr. Gehlert’s publications focus on social environmental influences on health, especially the health of vulnerable populations. Currently, she is working on the influences of neighborhood and community violence and unsafe housing on psychosocial functioning among African-American women newly diagnosed with breast cancer, with an eye toward how these factors “get under the skin” to affect gene expression and tumorigenesis. She has a special interest in the biology of women’s behavior.

Dr. Gehlert was a member of the Board of Scientific Counselors of the National Human Genome Research Institute at NIH until January 2016. She currently is a member of the Council for Extramural Grants at the American Cancer Society and of the Steering Committee of the California Breast Cancer Research Program. She is President of the American Association of Social Work and Social Welfare. Dr. Gehlert is a fellow of Society for Social Work and Research and the Academy of Transdisciplinary Learning and Advanced Studies. She is Past President of the Society for Social Work and Research and serves on the editorial boards of several journals, and as a managing editor of the Transdisciplinary Journal of Science and Engineering.